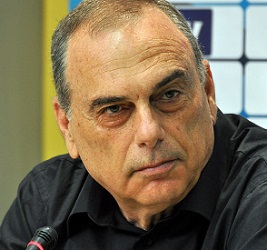 Ian Holloway’s 12-month reign at Selhurst Park came to an end on Wednesday, after a return of just one win in their opening eight matches in the Premier League.

Sportingly Better takes a look at some of the best football predictions on who will be the next Crystal Palace manager.

Eagles chairman Steve Parish has indicated his intention to sound out Tony Pulis, after accepting Ian Holloway’s decision to leave the club.

Pulis has proven Premier League experience from his time in the Potteries, but the task of staving off relegation in south London may be too arduous for even the former Stoke City manager.

“I will talk to Tony (Pulis), to see if he is interested. Tony never got relegated from Premier League. He’s out of work and a manager with Premier League experience”. Crystal Palace Chairman Steve Parish on unemployed manager Tony Pulis

Pulis’ immediately availability would appeal to Parish, who talked about bringing continuity to the club, something that the odds-on favourite would readily seek.
Pulis maintained Stoke’s presence in the Premier League for five years, a key factor that was reiterated by Parish during Wednesday’s press conference.

The Welsh manager has often been criticised for his style of football, but Pulis’ level of organisation will be vital after Crystal Palace made a plethora of changes over the summer.

Drifting in the latest football betting markets has been former manager Neil Warnock.

Like Pulis, Warnock is also immediately available, but the decision to leave Palace whilst the club were in administration for a job at QPR will still be remembered by the fans.

Warnock is however familiar with the chairman and every indication is that the outspoken manager would relish another spell at Selhurst Park.

A respected coach, Grant carries a good level of Premier League experience after his time at Chelsea, Portsmouth and West Ham

Decisions in January are likely to be key in Crystal Palace’s survival, something which Grant appears most suited to with his contacts around the globe.

Grant also is currently available after resigning from Partizan Belgrade last year, but the Israeli coach still carries plenty of influence around some key decision-makers in football.

Despite a plethora of available managers, it’s former Stoke manager Tony Pulis who appears to be the front runner for the Crystal Palace job.
Outgoing manager Ian Holloway left Pulis as his recommendation to Parish on who should succeed him and with the Welsh manager having never been relegated from the Premier League, the odds of a return to management look high for the former Potters man.

Recommended Bets
Back Tony Pulis to be the next Crystal Palace manager @1.53