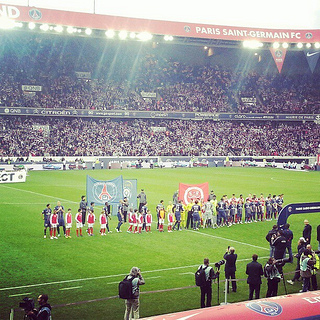 Last weekend’s victory over nearest rivals Lyon propelled PSG to the top of Ligue 1, but French football’s biggest spenders are only ahead on goal difference despite spending over €150m on new talent.

Ligue 1’s open title race has narrowed in recent months and all indications point to a three-horse race for Le Championnat.

Sportingly Better picks out the best football predictions for the French Ligue 1 title.

The current Ligue 1 leaders appear to have overcome ‘la crise’ after enduring a run of three defeats in five games in November, which left the capital side five points off the pace in the league and manager Carlo Ancelotti fighting to keep his job.

PSG’s win over Porto in the last game of the Champions League group stages left the French side finished top of Group A and a mini-revival soon followed.

Les Rouge et Bleu will be hoping to increase their brand’s worth in Europe, but a run in the Champions League could ultimately serve as a distraction for Ancelotti in the league.

Domestically, PSG have won four of their last five games in Ligue 1 and the Qatari-backed juggernaut appears to be gathering pace, thanks largely to the form of Zlatan Ibrahimovic.

The Sweden international has scored 17 of PSG’s 33 goals in the league, seven clear of any other player in Ligue 1 and the dominance of the former AC Milan striker has been clear for some time.

PSG not only have the best attack, but also the best defence in the league and the form and consistency of Blaise Matuidi in midfield has also been key.

The imminent arrival of Lucas Moura in the coming weeks will further strengthen Ancelotti’s arsenal, with PSG remaining the team to beat in Ligue 1.

Lyon remain level on points with leaders PSG, despite letting prize assets Cris, Kim Kallstrom and Aly Cissokho all leave the club over the summer.

OL’s dominance at Stade de Gerland has been crucial to Les Gones success in the league this season, whilst just two defeats in nine on the road point to a solid showing on their travels. Lyon have played some attractive attacking football this season and a 4/1 bet online with Ladbrokes.com represents the most value in the outright betting market.

Similarly to PSG, Lyon have also enjoyed success in Europe and coach Remi Garde has led OL to the knockout stages of the Europa League after a dominant display in the group stages, which saw Lyon winning five and drawing one of their six group games.

Lyon is heavily ingrained into Garde and the popular manager has been keen to exploit the young talent at the club with Samuel Umtiti, Clement Grenier, Rachid Ghezzal and Yassine Benzia all featuring for Les Gones this season.

Steed Malbranque is enjoying a renaissance as a holding midfield player, whilst Bafetimbi Gomis continues to get the goals for Garde.

Lyon’s depth and coherence make OL, PSG’s closest rivals in what is likely to become a two- horse race.

Marseille remain level on points with PSG and Lyon in Ligue 1 despite losing two more games than both of their rivals.

L’OM lost Stephen M’Bia, Alou Diarra and Cesar Azpilicueta over the summer and Elie Baup’s small squad has been found out at times in the league this season and also in Europe, where Marseille finished third in Group E behind Fenerbache and Borussia Monchengladbach in the Europa League.

A lack of goals and cutting edge appears to be Baup’s main problem, despite the presence of France international Andre Gignac and Ghanaian brothers Jordan and Andre Ayew.

Marseille have won seven of 10 away games in Ligue 1, but it’s the form at the Stade Velodrome which has slipped, with just four wins in eight games.

The winter break and elimination from Europe has come at just the right time for Marseille to rejuvenate their depleted squad, but a top three finish remains the most L’OM can hope for this season.