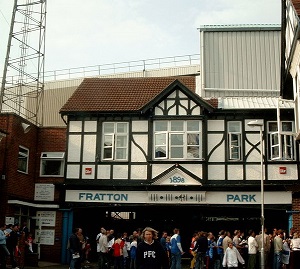 With just two days to go until the start of the English football season, Football League expert Josh Ilan takes a look at the ante-post action in League Two, with a pinstick guide on all the major betting markets.

After three relegations in four seasons, Portsmouth (1.83) will be hoping to kick-start their revival with promotion back to the third tier of English football. Pompey have made some impressive signings so far, including defender Joe Devera and midfielder Ricky Holmes.

Second favourites Fleetwood (2.37) are aiming for a sixth promotion since owner Andy Pilley tookover in 2003 and with some phenomenal transfers this season, the Cod Army’s chances in League Two this year have become even greater.

Chesterfield (2.75) are hoping to secure promotion back to League One at the second time of asking, as manager Paul Cook begins to stamp his own mark at the club.

Cheltenham (5.00) have been unsuccessful in each of their last two play-off battles in this division and despite the probable departure of star man Marlon Pack, manager Mark Yates has made some clever moves in the transfer market by strengthening the attack.

The departures of Calvin Zola and Jacques Maghoma will be difficult to replace for Midland’s side Burton (6.00) this season, but the Brewers have bought wisely over the summer and they should have another promising spell in League Two this year.

Cheltenham Town appear to offer the best value in the outright promotion betting market, particularly if the club can hold onto Marlon Pack. Manager Mark Yates has spotted the need for greater firepower and has boosted Cheltenham’s attack with the arrivals of Jamie Cureton, Ashley Vincent and Terry Gornell.

Oxford (2.37) manager Chris Wilder has chopped and changed his squad, with 14 players having left the club, but with eight players coming in including Jonny Mullins and Dave Kitson, Oxford’s claims for a play-off chance seem high.

Bristol Rovers (2.37) were one of the favourites to go up last year under Mark McGhee, but the expensively assembled side buckled under the pressure. This should not be a problem under John Ward, who has seemingly lifted the burden off his players’ shoulders.

Last year’s play-off finalists Northampton Town (2.75) will be hoping to avoid a hangover from their disastrous day at Wembley. Level-headed Yorkshireman Aidy Boothroyd has affirmed that his side will be in the promotion mix again, but it will be tough to gain the points needed this time around.

Colin Cooper’s appointment at Hartlepool (2.75) appears to herald the start of a new era at the club, with club icon Ritchie Humphreys having already departed for Chesterfield. While the changes have been minimal, expect the Pool to have a season of readjustment and transition under Cooper.

In his previous spell at Rochdale (3.00), Keith Hill broke their 37-year exile in League Two by taking them up. Having returned after being sacked as Barnsley manager, he is hoping to achieve another promotion with the Dale.

This season, there is room for optimism for Plymouth (4.50), with a change in fortunes likely. Manager John Sheridan has made a big difference to the club since his arrival in January, winning 42% of his 19 games in charge.

Rochdale look the dark horses for promotion after re-hiring Keith Hill. Hill took the Lancashire side up to League One in the 2009/2010 season after two attempts in the play-offs.

The Dale’s end-of season form also offers encouragement with Rochdale having lost just two of their last 11 matches in the league.

Recommended Bets
Rochdale to finish in the top seven places @3.00

In Paul Cox, Mansfield have a bright up-and-coming manager, who should prosper at a higher level and this summer’s acquisitions and the overall strength of the squad suggest that mid-table consolidation should be achieved.

Southend have had a torrid few months off the pitch and Chairman Ron Martin continues to make headlines due to his lax attitude towards the club’s finances and tax payments. After a whirlwind summer, it looks like the Shrimpers will have to settle for a mid-table placing.

Lincolnshire club Scunthorpe have been highly active in the transfer market, with 13 players having left the club and 10 players being brought in to Glanford Park. With multiple arrivals and departures, a season of transition and embedding is expected.

AFC Wimbledon have also brought in 10 new players, with Neal Ardley choosing to focus on the backline at the club. Complemented with a mix of youth and experience further forward, mid-table mediocrity looks like a distinct possibility for the Dons.

Wycombe manager Gareth Ainsworth has managed to bring in six players under a tight budget, including returnee Jon-Paul Pitmann. The new signings do not enthuse the quality required, leaving a mid-table finish on the cards.

York have brought both from afar and wide, from home-grown hero Richard Cresswell to Estonia international Sander Puri. York have the ability to stave off relegation this season, but anything more than a low mid-table finish would be viewed as a success for the club.

Bury have had an extremely turbulent summer, which has seen them go from the brink of extinction to being taken over by a young, ambitious chairman – hence their mantra, “Revolution”. Kevin Blackwell has had to build a squad from scratch, meaning a season of transition is likely.

Morecambe‘s (4.33) Jim Bentley has won plenty of plaudits for implementing an effective style of football which does gain results, but the club’s small budget and fan base continues to cause them problems.

Accrington Stanley (5.00) saw manager Leam Richardson leave for Chesterfield, with former England international James Beattie coming in to his place. Beattie has endured a tough start in management, having seen three of his star players having already left the club.

Dagenham and Redbridge (5.00) seem to have an imbalance of quality in their squad. A superb defence has been matched to a flailing attack, but the arrival of Rhys Murphy does go some way to resolving this. Risks have been taken, and only time will tell whether they work out, or not.

Newport (6.50) have a squad devoid of many stand-out players, emphasising their team-effort as opposed to individual brilliance. The jump in class to the Football League will be noticeable, whilst their arrivals have been slightly underwhelming.

Torquay (7.00) could be another side who might struggle this time around. Martin Ling was sacked after a long absence at the club, with Alan Knill converting his interim role into a full-time position. Knill preaches a conventional and traditional 4-4-2 not too dissimilar from Ian Atkins’ formation when Torquay got relegated in 2007.

Finally, financial scrutiny has seen a very quiet pre-season for Paul Tisdale’s Exeter (13.00). The Football League’s longest-serving manager has only been able to bring in two new players; one of which has already been shipped out on-loan. Exeter will have to rely on much of their ranks from last season this time around.

Newly promoted Newport seem to be the side shortest on overall quality in League Two this season. The Welsh side surprisingly earned promotion from the play-offs last season, but Justin Edinburgh does seem to have the right credentials at this level.

Torquay meanwhile have lost top scorers Rene Howe and Ryan Jarvis, and with a change in management and structure at the club, the Gulls could find their football league status flying away from them.

Recommended Bets
Torquay to be relegated @7.00