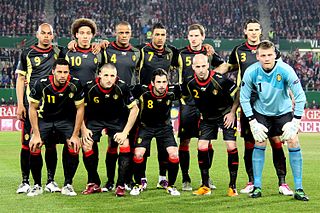 Selections from the European section of the 2014 World Cup qualification groups make up the best bets for this week’s football accumulator tips, returning odds of 4.04 on the treble.

Only Germany, England and the Netherlands have scored more goals than the Zmajevi in the World Cup qualifiers, with strikers Edin Dzeko (7), Vedad Ibisevic (5) and Zvjezdan Misimovic (4) firing Safet Susic’s side into a three point lead at the top of Group G.

Opponents Latvia were held to a 1-1 draw against lowly Liechtenstein in their last encounter in the group, but the Sarkanbaltsarkanie did at least put three goals past Turkey last time out.

Visitors Bosnia-Herzegovina could take another giant step towards qualifying for the 2014 World Cup on Friday and the likes of Dzeko and Ibisevic should fire the Zmajevi to victory at the Skonto Stadium.

The Republic of Ireland’s 4-0 win over Georgia on Sunday set up the Green Army perfectly for their Group C encounter with the Faroe Islands on Friday, as Giovanni Trapattoni’s side target World Cup qualification.

Strikers Robbie Keane and Simon Cox are both in encouraging form going into the match at the Aviva Stadium, with winger Aiden McGeady set to return from injury.

Ireland sit level on points with Austria and Sweden in Group C and a place in the World Cup play-offs will likely to be the home nation’s only possible route to Rio.

The Republic of Ireland beat the Faroe Islands 4-1 in Torshavn last October and the Green Army should win by another similar margin to secure a vital three points.

Belgium’s burgeoning reputation on the international stage continues to grow, after an impressive 4-2 friendly win over the USA last week.

Goals from Christian Benteke, Marouane Fellaini and Kevin Mirallas earned the Rode Duivels a comfortable victory in Cleveland, with opponents Serbia next up for Marc Wilmot’s side.

The visitors have yet to score away from home in any of their three qualification games in Group A and the Beli Orlovi have a nine point gap to overturn if they are to provide a credible challenge to the current runaway leaders.

Belgium have won five of their last six World Cup qualifiers in Group A and the Red Devils should power to another victory in Brussels tonight.

Betting Accumulator Odds – 4.04 (the Republic of Ireland to win by three or more goals, plus wins for Bosnia-Herzegovina and Belgium)