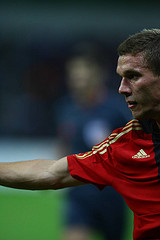 Second and third favourites for the tournament; Germany and Holland will battle it out for top spot in the so called “Group of Death” alongside Portugal and Denmark.

Germany are well fancied in the Euro 2012 betting markets and along with Spain won every single one of their qualifying matches in Group A, a qualifying group that contained Turkey, Belgium and Austria.

Joachim Low’s side scored three or more goals in eight of their ten qualifying games, with Bayern Munich’s Mario Gomez getting in on the act with six goals. More surprisingly however was the return of Miroslav Klose who scored nine goals and the German has quite a prolific record at international level and for FIFA World Cup tournaments.

Going forward left Germany open to the counter attack and during their last five qualification games in Group A Germany failed to keep a single clean sheet. Germany suffered defeat against Switzerland during the tournament warm-up games conceding five goals and the defensive susceptibility appears to be the German’s main concern. Germany finished runners up four years ago and Low’s side should again go close this time around.

Bert Van Marwijk’s side eased through the qualifiers winning nine of the ten matches. Defeat to Sweden in the last qualifying game was the only blemish with the Dutch already assured of qualification.

The Netherlands hit more goals during qualification than any other nation. A total of 37 goals were scored and the Dutch attack is clearly one to fear with the likes of Robben, Van Persie, Huntelaar and Sneijder. Surprisingly Holland picked up six clean sheets during qualification although the main focus of Van Marwijk’s side is the attack, as displayed at the 2010 FIFA World Cup.

Holland only got to the quarter finals of the last European Championship, but with the attacking forays of the Dutch, Van Marwijk’s side should progress a lot further at this summer’s tournament.

Little is expected of a Portugal side who look overly reliant on Real Madrid’s Cristiano Ronaldo.

Portugal narrowly finished second during qualification after a draw with Cyprus and losses to both Norway and Denmark and the Portuguese had to overcome Bosnia and Herzegovina during the Euro 2012 play-offs. With 21 goals scored in total Paulo Bento’s side are capable going forward with the likes of Ronaldo, Nani and Helder Postiga, but it is defensively that holds the worries for Portugal who kept just two clean sheets throughout the qualification process.

Portugal however have progressed out of the group stage for the last four European Championships, but the presence of Germany and Netherlands will severely lessen the likelihood of Portugal doing the same. Portugal also suffered a 3-1 home defeat against Turkey during the warm-up friendlies for the Euros.

Denmark are firm outsiders to qualify from Group B, but Morten Olsen’s side did qualify for the tournament by topping Group I and beating group opponents Portugal 2-1 in November.

During qualification Denmark won six games and lost just once in a five team group that included both Portugal and Norway. Denmark conceded just six goals throughout the qualifiers and picked up four clean sheets with the likes of Jacobsen, Agger and Simon Kjaer being protected by Christian Poulsen in midfield. The Danes scored 15 goals in Group I and Bendtner, Rommedahl and Christian Eriksen will be the main catalysts for Olsen. Brondby’s Michael Krohn-Delhi may also be one to watch on the left hand side.

Denmark failed to qualify four years ago for the first time since 1980 and the Danes have it all to do if they are to qualify out of Group B.