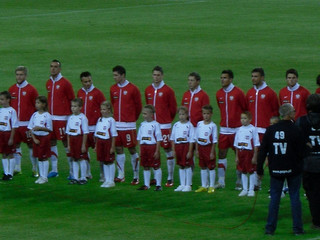 Co-hosts Poland kick off Euro 2012 against Greece in Warsaw on Friday, but Dick Advocaat’s Russia look the team to beat in Group A.

Russia qualified ahead of the Republic of Ireland to top of Group B with seven wins and just one defeat. Dick Advocaat’s side kept seven clean sheets and also impressed going forward with 17 goals, although the qualification group did contain international minnows Andorra.

Dzagoev and Pavlyuchenko scored four goals a piece during qualification and Dick Advocaat’s side largely consists of the same personnel who were semi-finalists four years ago with the likes of  Denisov, Anyukov, Pavlyuchenko and Arshavin all present.

Russia beat Italy 3-0 on Friday to boost morale and expectations of their ‘dark horse’ status with goals from Kerzhakov and Shirokov. Russia are also unbeaten in 14 international matches where they have conceded just four goals.

Russia may be a good back-to-lay option with the qualifiers from Group A facing one of Germany, Portugal or the Netherlands in the next round.

Franciszek Smuda’s side qualified as co-hosts for the European Championship and have prepared by playing no fewer than 11 friendlies since last August.

Poland have suffered just one defeat during their preparations for Euro 2012, picking up credible draws against Portugal and Germany. Smuda has organised the Poland side pushing five in midfield, with Borussia Dortmund’s Robert Lewandowski the lone striker in attack. The side is largely settled with Dudka, Mierzejewski, Blaszczykowski, Borzek, Wawrziniak, Pezko, Wasilewski and Matuszczyk all featuring heavily during the friendly fixtures.

Borussia Dortmund’s Blaszczykowski remains a threat down the right with Obraniak a capable player in midfield. Poland were knocked out at the group stage in 2008 losing twice, but the quality of Lewandowski and Blaszczykowski along with home support should make a difference this time around.

The Czech Republic finished 11 points behind Spain in qualifying Group I in a five team group. Not surprisingly Michal Bilek’s side lost home and away to the defending champions, but the Czech Republic also lost at home to Lithuania. Just three clean sheets were kept in Group I and Bilek’s side had to navigate their way through the play-offs where they overcame Montenegro 3-0 on aggregate.

Defender Michal Kadlec ended the campaign with four goals, thanks largely to goals from the penalty spot, but the Czech Republic can still boast the likes of Tomas Rosicky and Petr Cech from the Premier League.

The Czech Republic are regular qualifiers for the European Championship and were famous runners up at Euro ’96 Championship. A lack of firepower with an out of sorts Milan Baros leading the line is the biggest concern for Bilek.

Winners in 2004, Greece go into the tournament severely under-fancied. Greece however topped Group F with seven wins and three draws as coach Fernando Santos led the Greeks to automatic qualification.

Greece’s success has again been built on a solid defence keeping five clean sheets through qualification and did not concede more than a single goal in any game. Greek captain Karagounis brings a wealth of experience at 35 and is likely to be partnered in midfield with Katsouranis of Panathinaikos. Santos has named a squad with vast experience in his Euro 2012 squad, but similarly to the Czech Republic a lack of a cutting edge may prove to be their downfall.