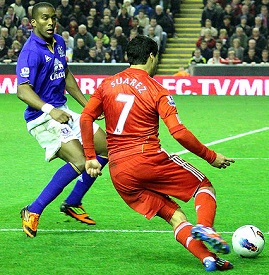 Liverpool’s Luis Suarez was the highest point scorer in Gameweek 11, after scoring twice and setting up another goal during Liverpool’s 4-0 victory over Fulham.

Robin Van Persie continued his record of scoring against his former club, as Manchester United beat Arsenal at Old Trafford.

The Dutch marksman has now scored in each of his last four games for the Red Devils in the Premier League, taking his tally to seven goals this season and a reprieve from international football should see the striker overcoming his recent groin injury.

Opponents Cardiff have picked up some notable results at home this season, but Van Persie’s form for the Red Devils should see Manchester United continue their resurgence.

Picked in last week’s fantasy football tips, Uruguayan striker Luis Suarez proved once again to be the spark for Liverpool, during the Reds 4-0 win over Fulham.

Suarez has scored eight goals since returning from suspension and despite missing the opening five gameweeks of the season, the former Ajax striker looks well on course to equal his tally of 23 goals from the previous campaign.

Opponents Everton have conceded just three goals at home all season, but the Toffees expansive play in Roberto Martinez’s first Merseyside derby could open the door to Suarez, Sturridge and Coutinho scoring on the counter attack.

Loic Remy’s early strike at White Hart Lane secured Newcastle all three points in the Premier League two weeks ago, as the Magpies flew into the top half of the table.

The on-loan QPR striker has started each of Newcastle’s last eight games in the Premiership and the club’s upcoming fixtures bode well for the attacker to add to his seven goal tally.

Opponents Norwich possess the worst defensive record away from home in the league this season and Newcastle’s in-form striker looks likely to punish Chris Hughton’s side even further on Saturday.

Stephane Sessegnon scored his first Premier League goal for West Bromwich Albion before the international break, helping the Midlands side secure a 2-2 draw at Stamford Bridge.

The Benin international has scored over 140 points in each of his last two seasons in the Premier League and although the attacking midfielder may fall short of that tally this time round, Sessegnon looks more than capable of collecting a good haul of fantasy points over the coming weeks.

Opponents Aston Villa have surprisingly kept three clean sheets away from home this season, but the Baggies home comforts make a fourth shut-out unlikely on Monday.