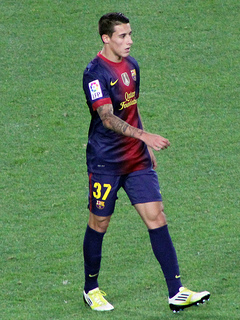 Our football tips for the weekend come from La Liga as Athletic Bilbao host Barcelona.

Football Tips for the Weekend

Barcelona’s 4-0 defeat at the Allianz Arena on Tuesday night will have deflated many of the players, but the La Liga leaders can wrap up the title this weekend with a win over Athletic Bilbao.

Jordi Alba will start at left back after suspension ruled the Spanish defender out of the return leg at the Nou Camp, whilst Cesc Fabregas, David Villa, Alex Song and Eric Abidal are all expected to be drafted in. Youngsters Thiago Alcantara and Christian Tello may also be given a rare run-out.

Barcelona have won 27 of their 32 matches in La Liga this season and the Blaugrana are just one goal short of scoring 100 goals this campaign, with six games left to play.

Barcelona have scored at least two goals in 23 of their last 25 away matches in La Liga. Back Barcelona to score over 1.5 goals at 1.66.

Hosts Athletic Bilbao have won just one of their last five games in La Liga and los Leones are still not clear of the threat of relegation, despite sitting eight points clear of the drop zone in fourteenth place.

Only Deportivo and Mallorca have a worse defensive record than Athletic Bilbao this season and the Basque side conceded three goals without reply against Real Madrid during their last game at San Mames.

Barcelona know a win this weekend could see them crowned as champions and the La Liga leaders could bounce back with a huge win against Athletic Bilbao on Saturday, despite resting a number of first team players.