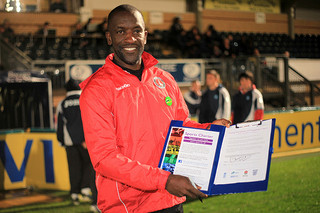 Brighton and Sheffield Wednesday will both be looking to close the gap on early leaders Blackpool at the top of the English Championship on Friday night, whilst three points will be on the wish list of both Charlton and Crystal Palace as they meet at The Valley.

Sportingly Better takes a look at the early action in the Football League.

Dougie Freedman’s Eagles have the worst defensive record in the Championship with no fewer than 10 goals conceded, but the former striker has got his side confident in front of goal scoring in every game. Crystal Palace have scored in each of their last 10 away games in all competitions and the likes of Glenn Murray, Wilfried Zaha and Jermaine Easter are all capable of getting goals. Blackburn striker David Goodwillie has  recently joined the club on loan until January.

Charlton boss Chris Powell couldn’t have asked for a tougher start with the Addicks having already come up against Birmingham, Leicester, Hull and Nottingham Forest, but just the one defeat has left cautious optimism around The Valley.

Last season in League One, Charlton only once failed to score at home and the chances of a home win look reasonable at 1.90.

Charlton have  scored in all but one of their games in the English Championship and the addition of Ricardo Fuller should keep the likes of Bradley Wright-Phillips and Yann Kermorgant on their toes with both rivals likely to find the net on Friday night.