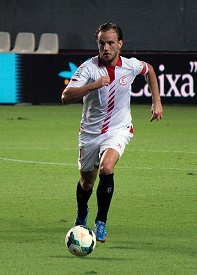 Last weekend’s winning accumulator bet saw us move even closer to the 20 point profit mark for the season, as a second half goal from Udinese’s Antonio Di Natale wrapped up our betting treble.

Selections from La Liga, the Bundesliga and the Football League make up the bets for this weekend’s football accumulator tips on Sportingly Better, returning odds of 5.19.

League Two side Chesterfield will be looking to bounce back from last weekend’s Johnstone’s Paint Trophy final defeat at Wembley, with Newport the visitors to the Proact Stadium.

The hosts have lost just twice at home all season, but just one win in seven league games has begun to raise question marks over Paul Cook’s automatic promotion hopes.

Midfielder Ollie Banks has been ruled out for the rest of the season, but Daniel Kearns could come back into the starting line-up after missing last week’s showpiece, in what is likely to be the only change for the hosts.

Visitors Newport County suffered their ninth league defeat in 2014, with a 2-1 defeat away at Portsmouth.

Justin Edinburgh’s side have won just two of their last 18 matches in League Two and the hosts will be eager to bounce back from last weekend’s cup final defeat with a win on Saturday.

European hopefuls Sevilla will be looking to bounce back from their second successive defeat in a row, with Espanyol the visitors to the Sanchez Pizjuan.

Sevilla won their sixth game in a row last month with a 2-1 victory against Real Madrid, but a lacklustre display against Celta Vigo last time out saw Unai Emery’s side lose that winning streak.

The hosts have a fully fit squad for Sunday’s encounter and are expected to name Premier League targets Carlos Bacca and Ivan Rakitic in the starting line up.

Opponents Espanyol were largely encouraging last time out despite losing to rivals Barcelona, but the visitors will be without Victor Sanchez, David Lopez and Kiko Casilla for Sunday’s game.

Bayern Munich will be looking to maintain their unbeaten run in the Bundesliga this weekend, with Augsburg the next opponents for Pep Guardiola’s side.

The Bavarians retained their Bundesliga crown in record fashion last weekend and their 3-3 draw against Hoffenheim last time out meant that Bayern have not lost in the league for 53 matches.

Bayern have scored at least two goals in each of their last 20 games in the Bundesliga, but the visitors are expected to heavily rotate their side with Xherdan Shaqiri and Mario Gotze expected to come in.

Hosts Ausgburg have defied expectations this season, but three defeats in their last four matches is quickly ending their European dream.

Bayern Munich have conceded a goal in five of their last six matches in all competitions and the hosts look well priced to break the rearguard as well in Saturday’s Bavarian derby.

Betting Accumulator Odds – 5.19 (wins for Chesterfield and Sevilla as well as both teams to score in the Augsburg v Bayern Munich match)