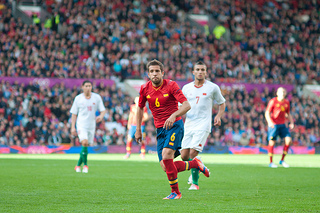 Selections from the 2014 World Cup qualification games make up the bets for our midweek football accumulator tips, returning odds of 5.34 on the treble.

Croatia kept pace with joint-leaders Belgium on Friday night following a 2-0 victory over Serbia and Igor Stimac’s side have now netted twice in each of their last three games in the group.

Vatreni have won four of their five qualification games in Group A and Croatia will be looking for another positive result in the Millenium Stadium on Tuesday.

Hosts Wales will be looking to build on their 2-1 victory in Hampden Park, but the Dragons do have contend with a number of absentees in the centre of midfield including Aaron Ramsey and Jack Collinson.

Goals from Mario Mandzukic and Eduardo helped Croatia secure a 2-0 win over Wales in the reverse fixture back in October and Igor Stimac’s side will look to maintain the pressure at the top of Group A.

Spain continued their stuttering form in qualification after Teemu Pukki rescued a point for Finland 11 minutes from time on Friday night.

La Roja have drawn two of their four qualification games in Group I and manager Vicente Del Bosque will be keen to see his side not fall any further behind group leaders France on Tuesday.

The hosts will be cautiously optimistic going into their Group I showdown, with l’Equipe having hailed les Bleus’ performance in the reverse meeting in October as France’s best in almost seven years.

A win for Spain would see la Roja overtake France in the group and Vicente Del Bosque’s side will look to go on the front foot at the Stade de France on Tuesday.

Goals from Kevin De Bruyne and Eden Hazard gave Belguim a priceless win against Macedonia in Skopje on Friday and the Rode Duivels will be looking to secure another win against the same opponents on Tuesday.

Belgium have kept a clean sheet in five of their last seven matches in World Cup qualification matches and Marc Wilmot will be charging his side to pick up another clean sheet against a stubborn Macedonian side.

Visitors Macedonia have managed just three goals in their five qualifiers in Group A, but the Crveni Lavovi are capable of unsettling their opponents with Napoli’s Goran Pandev still the star turn for Cedomir Janevski’s side.

Belgium will be keen to keep pace with Croatia and another clean sheet in Brussels will reaffirm the Red Devils’ defence as one of the best in Europe.

Betting Accumulator Odds – 5.34 (Belgium to win to nil, both teams to score in the France v Spain game and a Croatia victory)