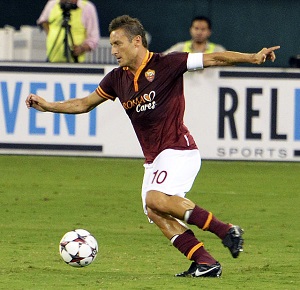 Selections from the Premier League, Serie A and La Liga make up the bets for today’s football accumulator tips on Sportingly Better, returning odds of 2.98.

Roma will be looking to extend their 100% record this season, after a comprehensive 5-1 victory over CSKA Moscow in the Champions League this week.

The capital-based outfit have won both of their Serie A matches this term, with the hosts keen to defend their record at the Stadio Olimpico which has seen them go undefeated in 20 of their last 21 matches there.

Opponents Cagliari have failed to win 25 of their 26 matches away from home and the trip to Rome is likely to go only one way.

Roma have scored at least two goals in six of their last seven matches in Serie A and the hosts should secure another comfortable victory this weekend.

Atletico Madrid will have to do without striker Mario Mandzukic on Saturday, after the Croatian player broke his nose in the Champions League midweek.

Diego Simeone’s side are unbeaten in La Liga and come off the back of a victory over Real Madrid at the Santiago Bernabeu.

Opponents Celta Vigo are unbeaten in the league so far, but the visitors have yet to be tested domestically this season.

Atletico Madrid have won each of their last four encounters against Celta Vigo in all competitions and the hosts should secure another victory as they bid to defend their La Liga crown.

A late Harry Kane own goal denied Tottenham victory at the Stadium of Light, as Sunderland grabbed an unlikely point.

Mauricio Pochettino is likely to revert to his first-choice side after resting a number of his playing squad for the trip to Serbia in the Europa League, with Andros Townsend the only likely absentee.

Tottenham are undefeated in their last nine home matches against West Brom in all competitions and the return of a number of key personnel for Spurs should see the north London side pick up all three points on Sunday.