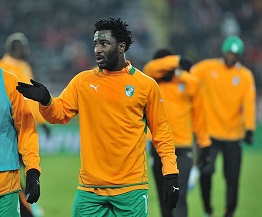 Sportingly Better takes a look at Wiflried Bony’s arrival to the Premier League and the impact the striker could have in his first season in English football.

After a short spell with Issia Wazi early in his career, a move to Europe proved inevitable and after failing to impress Liverpool on trial back in 2007, Wilfried Bony soon moved to Sparta Prague in the Czech Republic.

Twenty two goals and five assists was Bony’s return for Sparta Prague over 59 appearances for the club, but it was the six foot attacker’s strike rate in Europe (11 goals in 20 appearances) that began to highlight the Ivorian’s blossoming pedigree.

A January move to Eredivisie side Vitesse Arnhem soon followed and after earning a starting spot for the Vitas up front, Bony went on to score 17 goals and eight assists in his first full season at the club.

Last season’s tally however was far more impressive and the Ivory Coast striker signed off his time in the Eredivisie by winning the Dutch Player of the Year award, after scoring 31 goals in 30 appearances for the club.

Bony’s aerial prowess, strength and goal poaching ability making the Ivory Coast international ideally suited to the rigours and style of the Premiership and the striker should feature heavily for the Swans this season ahead of Michu in Michael Laudrup’s preferred 4-2-3-1 formation.

“I watched Swansea a lot last season on TV. They have some good players and I like the way they play. I appreciate the style, which is similar to the Dutch way, and I think being at Swansea will help me develop as a player. I had a lot of offers from all across the world, including England, France, Ukraine, Russia and the UAE. But I chose Swansea because it is a good club with a corresponding style, a great manager and, of course, playing in the Premier League. I considered everything and Swansea came out on top.”
Wilfried Bony on his summer move to Swansea

Priced at £8.0m, Bony will likely find some favour as a mid-priced striking option given his record in the Eredivisie last season, but with Europa League qualification on the horizon and Swansea’s tough start to the season to consider; the best strategy may be to draft in the striker from Gameweek 8 onwards.

Recommended Tip
Transfer in from Gameweek 8