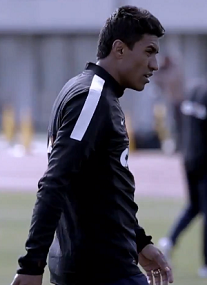 Tottenham announced the signing of Paulinho for a fee of £17m on Saturday, with the club having reportedly seen off interest from both Inter Milan and Real Madrid to capture the highly-rated midfielder.

Sportingly Better takes a look at Paulinho’s arrival to the Premier League and his potential value in this year’s fantasy football game.

At just 18 years of age, Paulinho left Pão de Açúcar in search of first team and an early move to Europe saw the Brazilian midfielder sign for Latvian side FC Vilnius. Paulinho made 38 appearances for the club; scoring five goals before an ill-fated switch to Polish side LKS Lodz left Paulinho isolated.

A return back to Pão de Açúcar soon followed and despite racking up seven goals in 39 appearances, the midfielder was allowed to move on with Bragantino the next destination.

Six goals in 28 appearances was enough to convince South American giants Corinthians of his worth and after a tentative first season, Paulinho contributed with 16 goals and 12 assists in 59 appearances for the club. Paulinho scooped a list of honours for Corinthians including the Copa Libertadores, the Serie A Campeonato and the FIFA Club World Cup.

Most recently Paulinho starred in Brazil’s Confederations Cup victory, scoring two goals in just four appearances, before being named as the competition’s third best player behind Neymar and Andres Iniesta.

Paulinho’s arrival at White Hart Lane will likely see Spurs shift to Andre Villas-Boas’ preferred 4-3-3 formation next season, slotting in alongside Moussa Dembele and Sandro in a very dynamic midfield.

The Brazilian midfielder has been touted as a box-to-box midfielder, but an improving eye for goal has led to former South American great Juan Roman Riquelme comparing the player to England’s Frank Lampard.

“Lampard is a great player not only for Chelsea but world football. I intend to follow in his footsteps as he is a very professional guy. David Luiz always speaks of him on international duty. I’ve always looked at what Lampard does and, to me, he is a phenomenon – the way he hits the ball, what positions he takes up. He really is incredible.”
Paulinho on Juan Roman Riquelme’s comparison with Frank Lampard

Paulinho’s displays at the Confederations Cup will be fresh in the mind of many fantasy managers and with Tottenham enjoying a favourable run of fixtures up until Gameweek 9, the signing of Paulinho may be worth an early punt, with the midfielder expecting to attract a price of £7.5 on the fantasy football market.