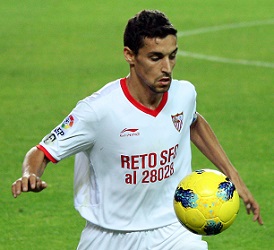 Tuesday’s statement that Sevilla have accepted an offer for winger Jesus Navas has left Manchester City on the verge of securing their first signing of the season.

Sportingly Better analyses the arrival of Jesus Navas to the Premier League and his potential fantasy football worth to managers next season.

After spending his entire career at Sevilla, Spanish winger Jesus Navas has decided that the time is right to make the switch away from Andalusia, after speaking about his admiration for incoming coach Manuel Pellegrini and the project at Manchester City.

Navas formed a key part of Sevilla’s UEFA Cup success in 2006 and 2007 and the direct wing play and dribbling ability of the Andalusian-born player has been held in high regard by commentators in La Liga for some time.

The quick-dribbling winger formed part of Spain’s World Cup 2010 and Euro 2012 winning squads and the fleet-footed midfielder has also been named in Vicente Del Bosque’s 23-man squad for the upcoming Confederations Cup tournament.

Navas has averaged a return of 10 assists in the league over the last six seasons, but a lack of goals over the past three years has left the 27-year old short of being mentioned in the same bracket as some of La Liga’s more illustrious players.

Navas scored just 23 goals in 280 La Liga appearances for Sevilla and the failure to find the net in the league at all last season, may leave plenty of managers weary of naming the midfielder in their initial fantasy football squad.

Navas will likely command a price tag of £8.0m or £8.5m on the fantasy football market, but despite an impressive contribution of assists, Navas’ lack of goals may ultimately leave the Spain international as an overlooked selection early on in the season.