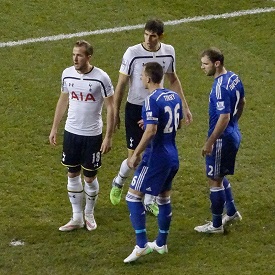 On current form, Harry Kane is an absolute must-have on fantasy football. The Tottenham Hotspur man is scoring for fun and has netted at least one goal in each of his last four Premier League games – an impressive achievement.

While he has a long way to go before he equals Jamie Vardy’s current run of ten straight matches with a goal, Kane is showing signs that he has regained his scoring touch in front of the net and you should act now before his value rises even further. Here’s why you must pick Kane up immediately.

Tottenham are currently fifth in the Premier League table and haven’t lost since the opening day of the season. Spurs are performing admirably and their front players in particular are beginning to click and create numerous opportunities in each and every match. If they continue at this rate, Kane will score a hatful of goals and could well finish as the leading points scorer on fantasy football.

In fact, a number of articles at Bookies.com have suggested that Kane will continue to profit this season and could exploit opposing defences on a weekly basis for the remainder of the campaign. At the time of writing, he is 7/1 to finish as the Premier League’s top goal scorer this season – a feat that isn’t beyond the realms of possibility.

You can keep up to date with all of the latest Harry Kane news via Bookies’ website. In fact, they can also inform you about recent fixtures, match previews and tips for upcoming Tottenham matches. Next up for Spurs is a home clash with Jose Mourinho’s Chelsea and Kane will be desperate to continue his fine run of form against the defending champions.

Kane is also heavily involved in Tottenham’s link-up play and has recorded a number of assists in the opening stages of the season. According to figures taken from the Premier League’s official fantasy football game, Kane ranks as the fourth best striker right now and it wouldn’t be a huge surprise to see the England international remain towards the top of the standings throughout the entire season.

For the time being, Kane is the standout fantasy star. Vardy has had an exceptional run but Leicester’s tricky fixture list makes it very difficult for some to stick by him. In the meantime, Kane may benefit from an easier run of fixtures and could close the gap at the top of the fantasy football standings. As the busy festive period approaches, make sure you transfer Kane into your side before it’s too late.