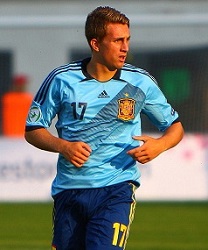 Roberto Martinez continued to strengthen his Everton side last week, with the loan signing of Barcelona’s highly-rated midfielder Gerard Deulofeu.

Sportingly Better takes a look at Gerard Deulofeu’s loan deal at Everton and his potential fantasy football value for the coming season.

Deulofeu netted a fairly respectable return of nine goals in his first full season with Barcelona B in the Spanish Segunda division, but it was last year when the attacking midfielder really came alight.

Eighteen goals and nine assists from 33 games was Deulofeu’s return in the second division, with the promising midfielder being tied down to a new four-year contract just two months ago.

Deulofeu has been capped for Spain from Under-16 to Under-21 level, winning back-to-back European U19 Championships in 2011 and 2012. The midfielder also earned the Golden Player award for his performances in last year’s Championships in Estonia.

Deulofeu’s pace and one-on-one dribbling ability will likely be used out wide and on the break, with the Barcelona youngster likely to be used from the bench and away from home, with League Cup outings also likely to be on the cards.

Roberto Martinez may well deploy Deulofeu on either side of Everton’s attack should the Spanish manager opt for his favoured 3-4-3 formation, with the skilful La Masia graduate capable of playing on either flank.

“Gerard is a real diamond of Spanish football and a boy with incredible footballing talent and I am delighted that he has chosen to take the next step of his career with Everton. He is a young man with a lot of potential to be a real star and the Everton family is the perfect environment for him to progress. We understand a lot of other top clubs around Europe were interested in Gerard so it is fantastic he has joined us.”
Roberto Martinez on new signing Gerard Deulofeu

A price tag of £6.0m has been afforded to Deulofeu, but the midfielder’s categorisation as a forward will see many managers overlook the selection of the highly-rated youngster, particularly with concerns over the player’s initial playing time.