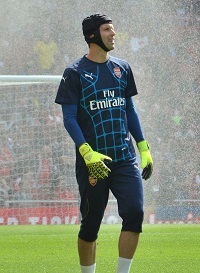 Chelsea’s Eden Hazard remains the most chosen player ahead of the new Premier League season, with Christian Benteke, Nathaniel Clyne and Wayne Rooney all finding early favour in the pre-season fantasy football picks.

Guest blogger Ashil Parekh picks out his best fantasy football tips for Gameweek 1, as Manchester United host Tottenham in the opening game of the season.

There are some players who are said to be fixture proof and Hazard, who picked up 233 fantasy points last season is surely one of them.

Having scored a classy goal against Barcelona during pre-season, Hazard looks set to pick up where he left off and a home tie against Swansea appears on paper the perfect start for the champions defence.

The Belgian international has been selected by 57% of fantasy managers, which is 10% more than any other player in the fantasy league currently.

The Blues are undefeated in their last 20 matches at Stamford Bridge in the Premier League and Hazard looks set to kick-start Chelsea’s defence after a disappointing turnout in the Community Shield last weekend.

Departures of strikers Radamel Falcao and Robin van Persie has paved the way for Wayne Rooney to move further forward from his adopted position last year.

Louis van Gaal’s admission that the Manchester United captain will start the campaign as the club’s main striker has saw backers of Rooney reach 40.3% in fantasy ownership.

No player has scored more goals in this fixture than the England international with nine goals and the Red Devils inspirational captain will be hoping to kick start what could prove to be his biggest season in United colours this weekend.

Currently the Premier League’s top selected goalkeeper, Arsenal goalkeeper Petr Cech will be hoping for a strong start to the season after making the switch from champions Chelsea during the summer.

Arsenal’s opening half of the campaign last year saw the Gunners keep just five clean sheets, but the command of the Czech goalkeeper should see Arsene Wenger’s side significantly improve on that return.

In Cech Arsenal have not only found an outstanding shot-stopper but also a player who can lead after lifting the Champions League with Chelsea three years ago and with injuries to West Ham’s forward line, Cech could find himself bagging his first clean sheet of the campaign on Sunday.

Selected by over 22% players Manchester City’s main acquisition this summer looks set for an explosive start to the campaign after securing a £49 million switch from Liverpool.

Sterling offers the Citizens greater variety and fluidity in the final third and at £9.0m, the fleet-footed forward comes in at £1.0m cheaper than David Silva (£10.0m).

With strikers Edin Dzeko and Stevan Jovetic having moved on, Sterling could find himself playing through the middle at some stage this season and with an away trip to the Hawthorns on Monday night, the English midfielders pace and direct play should prove productive on the break for Manuel Pellegrini’s side.