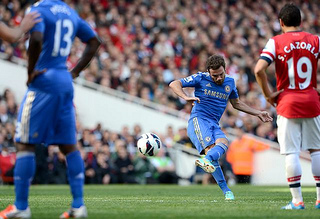 Luis Suarez helped Liverpool to their first win of the season after scoring a hat trick during Liverpool’s 5-2 victory at Norwich.

Demba Ba continued his goalscoring run with a brace against Reading, whilst Steven Fletcher bagged another goal for Sunderland in a 1-0 victory over Wigan.

Tottenham’s Gareth Bale was on hand to score as Andre Villas-Boas’ improving side defeated Manchester United at Old Trafford.

Juan Mata picked up his first goal of the season in a 2-1 victory at the Emirates, whilst Peter Crouch staked his claim for an England call up with a match winning brace against Swansea.

Juan Mata was heavily involved in Chelsea’s 2-1 victory at the Emirates Stadium in Gameweek 6 with a goal and an assist against Arsenal. The Spanish midfielder followed up his first goal and bonus points of the Premier League season with a brace against FC Nordsjaelland on Tuesday in the UEFA Champions League.

Chelsea’s opponents Norwich conceded five goals at Carrow Road last time out against Liverpool and only Southampton have a poorer defensive record in the Premier League.

Mata scored in this fixture last season in a 3-1 victory for the Blues and the Spanish international looks set for another starring role on Saturday.

Tottenham’s Welsh midfielder has been at the heart of Spurs’ resurgence with two goals, three assists and nine bonus points in the last three gameweeks.

Bale has featured in all six games for Tottenham this season and looks set to again be used in the Europa League against Panathinaikos on Thursday with Andre Villas-Boas gunning for the trophy.

Opponents Aston Villa have kept just one clean sheet in the Premier League this season and Bale will be keen to carry his and Tottenham’s momentum into Gameweek 7.

The Uruguayan striker is also a strong consideration for the captain’s armband this week after netting a superb hat trick against Norwich last time out.

Suarez’s three goals against the Canaries took the controversial striker’s tally to five for the season and the former Ajax striker will have to carry Liverpool’s attack until at least January with Fabio Borini failing to make an impact.

Opponents Sunderland are unbeaten in the Premier League and have only once conceded more than one goal, picking up two clean sheets in five games. Suarez netted in this fixture last season and the Uruguayan will again be targeting a goal.

Demba Ba topped the Premier League goalscoring charts after netting his second brace of the season against Reading at the Madejski Stadum.

The Senegalese striker has now scored in each of his last three games for Newcastle and is currently the most in-form player in the Premier League. Twelve bonus points highlights Ba’s match winning contributions for the Magpies.

Arsene Wenger has a knack of turning wingers into strikers and Ivorian Gervinho is showing signs of developing a real goalscoring touch during his second season in England.

The former Lille player added to his brace against Southampton in Gameweek 4 with his third goal of the season against Chelsea last weekend and Gervinho should feature heavily for Arsenal who enjoy a good run of fixtures over the next three gameweeks.

Opponents West Ham have conceded just one goal at Upton Park this season, but Gervinho is likely to cause the Hammers problems on Saturday.