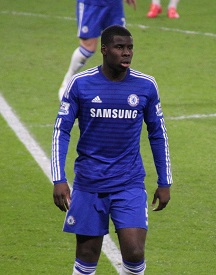 Kurt Zouma scored for Chelsea as the Blues swept aside Arsenal at Stamford Bridge, meanwhile Anthony Martial’s goalscoring run shows no sign of ending with a goal against Southampton last time out.

Now owned by over half of all fantasy football managers, the Premier League’s breakout player of the season so far shows no sign of relenting.

The Algeria international has now picked up five goals and three assists in the opening six games of the campaign and a bonus point haul of 14 shows how influential Riyad Mahrez has been for Claudio Ranieri’s Foxes this term.

Opponents Arsenal bounced back from defeat against Chelsea last weekend to secure a league cup victory against arch-rivals Tottenham, but defensively the Gunners look susceptible despite picking up clean sheets in half of their encounters so far.

With Leicester still unbeaten in the Premier League, expect Mahrez to continue to rack up the points this weekend.

The French prodigy is off to a flying start with his Manchester United career and has scored a brace and a goal of the bench in just two Premier League matches.

With Wayne Rooney out of form, Manchester United will be banking on the teenager to again find the back of the net against relegation-battling Sunderland.

The Black Cats look horribly out of sorts with just  two points from the campaign so far and are placed below rivals Newcastle at the bottom of the Premier League table.

A midweek thrashing against Manchester City in the Capital One Cup will not do any good to the confidence levels in Dick Advocaat’s side and priced at just £8.3m Martial is set to see his stock rise even further this weekend.

Chelsea are back in business. A comprehensive romp against Maccabi Tel Aviv in the Champions League, coupled with wins against Arsenal in the league and Walsall in the Capital One Cup has seen the Blues back in favour.

Jose Mourinho’s side have conceded only one goal in their last three matches in that run and the presence of Kurt Zouma at the back has been noticeable.

Zouma helps Chelsea press other teams better and has pace to track back smoothly against opposition wide players. The France international has been rock solid at the back and has seemingly displaced John Terry in the side.

A potential captain choice, Pedro’s impact for Chelsea so far (one goal and two assists) means the former Barcelona forward has either scored or assisted almost half of Chelsea’s goals in the Premier League.

With Diego Costa out through suspension and Hazard still wide of the mark, a lot will depend on Pedro who looks set to play just off Loic Remy in Chelsea’s 4-2-3-1 set-up.

After three consecutive wins on the bounce in all competitions, Jose Mourinho’s winning mentality seems to have quickly found it’s way back and with opponents Newcastle in desperate form, expect Pedro to continue to be Chelsea’s main protagonist.