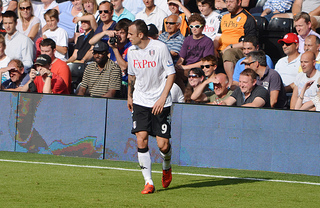 There were big victories in Gameweek 4 as Arsenal hit Southampton for six and Manchester United put four past Wigan with debutantes Alexander Buttner and Nick Powell getting on the scoresheet.

Steven Fletcher continued his goalscoring run of form for Sunderland and Dimitar Berbatov picked up two goals for Fulham as they beat West Brom at Craven Cottage. Deadline-day signing Christian Benteke scored on his debut as Aston Villa picked up their first win of the season, whilst West Ham recorded yet another clean sheet in the Premier League.

Sportingly Better takes an early look at the captain choices and fantasy football transfers for Gameweek 5.

No player has made more assists in the Premier League than Chelsea’s Eden Hazard. The midfielder’s six assists, three bonus points and goal have given the Belgium international 37 points from just four games and the former Lille player has made an impressive start to his career in England.

Hazard’s 20 goals and 15 assists last season highlight the heights that the Belgium could reach in his first season in the Premier League, particularly if penalty duties are wrestled away from Frank Lampard. Chelsea face Stoke at Stamford Bridge this weekend and the guile of Hazard could prove key against the unbeaten Potters.

Three goals in two games leaves Sunderland’s Steven Fletcher the most in-form player in the Premier League. Fletcher scored 12 goals for Wolves in the Premiership last season and the delivery of Larsson and Johnson should ensure that the Scottish forward hits double digits again this time around.

Sunderland enjoy a good run of fixtures over the next nine gameweeks with only Manchester City the notable opposition. The Black Cats face West Ham in Gameweek 5 who have kept clean sheets in each of the last two games, but manager Martin O’Neill will be hoping that Fletcher proves the difference this weekend.

Berbatov’s class shone last weekend with a double against West Brom in the Bulgarian’s home debut for the Cottagers. Berbatov picked up three bonus points for his efforts that afternoon, leaving Martin Jol to claim that the striker is now more of a complete forward than the number nine he had worked with at Tottenham.

Berbatov has scored 130 or more fantasy points in five of the last six seasons in the Premier League and the Bulgarian could reach a similar tally this time around with the forward also primed for penalty duties. Berbatov scored a hat-trick against Wigan in December for Manchester United and could find the net again on Saturday.

Only Chelsea’s Branislav Ivanovic has accrued more points as a defender than West Ham’s Winston Reid this season. The New Zealand international has been impressive at the back for the Hammers picking up five bonus points and helping West Ham to keep three clean sheets in just four games.

Reid carries a goal threat in the air and scored against Fulham at the Boleyn Ground last time out. West Ham will be hoping to record another shut-out on Saturday against Sunderland.