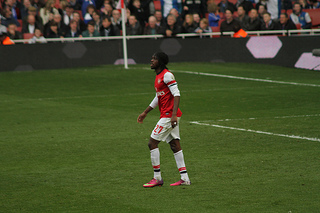 Gervinho was the highest points scorer in Gameweek 31, after scoring in Arsenal’s 4-1 victory over Reading at the Emirates Stadium.

Tottenham’s Jan Vertonghen and Gareth Bale both found themselves on the scoresheet during Spurs’ 2-1 victory away at Swansea, whilst Dimitar Berbatov proved the difference as Fulham shot down QPR on Monday.

Luis Suarez’s impact inside the box was once again on show last weekend, as the Uruguay international earned a penalty against Aston Villa, after Nathan Baker brought down the Liverpool striker in the area.

The Premier League’s top scorer has assisted in four of his last five appearances in the league and the selection of Daniel Sturridge in the more advanced role for Liverpool, has seen Suarez create plenty more opportunities for the team.

Opponents West Ham have conceded at least two goals in five of their last six away games in the Premier League and Suarez could find himself finishing Gameweek 32 with more points than any other player in the division.

Santi Cazorla continued to illustrate his quality on the pitch with a fine curling effort against Reading last weekend, as the Gunners ran out 4-1 winners at the Emirates Stadium.

Cazorla remains fundamental to Arsenal’s play in the league and the Spanish playmaker’s return of four goals over the last five gameweeks highlights the Spanish midfielder’s current run of form for the club.

Opponents West Brom have failed to keep a clean sheet at the Hawthorns in each of their last six games in the Premier League and Arsenal’s midfield maestro will be hopeful of building on his assist in the reverse fixture back in December.

Jay Rodriguez followed up his headed goal against Liverpool in Gameweek 30 with a composed finish against Chelsea last time out and the Southampton striker looks increasingly favoured by Mauricio Pochettino.

The former Burnley forward was used largely as an understudy to Rickie Lambert during Nigel Adkins’ reign in the Premier League this season, but Pochettino’s decision to pair the striker alongside Lambert appears to be having the right desired effect.

Opponents Reading have the worst defensive record in the Premier League and Rodriguez has every opportunity to make it three goals in three games for Southampton this weekend.

Last week’s starring role against Reading will have alerted many fantasy managers to Gervinho’s availability, particularly in the wake of Theo Walcott’s ongoing injury problems.

Gervinho has featured sparsely for Arsenal, playing little over 850 minutes of Premiership football this season, but the Ivorian forward has still managed five goals and three assists during his playing time for the Gunners.

Opponents West Brom have failed to keep a clean sheet in each of their last six games at the Hawthorns and with Arsenal enjoying a double gameweek next week, Gervinho could play a crucial part in the Gunners‘ attempt to secure Champions League football.