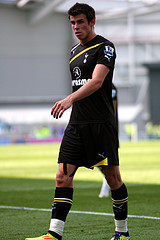 Jose Enrique was the highest points scorer in Gameweek 26, after grabbing an impressive 18 points during Liverpool’s bonus match against Swansea.

Fantasy favourite Michu also made the most of Swansea’s double gameweek by picking up 18 points, whilst Angel Rangel (10) and Pablo Hernandez (13) both returned good hauls for the Swans.

Gareth Bale further illustrated his burgeoning status on the world stage with two strikes against Newcastle, whilst Robin Van Persie kept up his return for Manchester United after scoring one and making another during the Premier League leaders routine victory over Everton.

Charles N’Zogbia endured a solid afternoon as Aston Villa secured a priceless victory over West Ham, whilst a penalty save from Ben Foster helped West Brom to all three points at Anfield.

Both Liverpool and Swansea do not feature twice during Gameweek 27.

Theo Walcott has either scored or assisted in 9 of his last 10 games in the Premier League and the English forward’s end-of-season form is likely to be crucial if Arsenal are to secure Champions League football this season.

A total of eight assists have been made by Walcott for Arsenal this season and the former Southampton player continues to illustrate his growing influence in this division.

The England international’s 11 goals in the league have come from just 58 attempts at goal and Walcott’s conversion rate can only be bettered by midfielders Michu, Juan Mata and Frank Lampard.

Opponents Aston Villa have the worst defensive record away from home in the Premier League and Walcott will once again be Arsenal’s main protagonist this weekend.

Robin Van Persie’s impressive form for the Red Devils shows no sign of relenting, after the Dutch striker’s goal and assist against Everton earned Manchester United all three points two weeks ago.

Only Gareth Bale can get within 10 points of Van Persie’s personal bonus points total and the former Arsenal striker’s 183 fantasy points cannot be bettered by any player in the Premier League.

Van Persie’s 19 goals this season have come from just 93 shots and the Netherlands international could surpass his league record return of 13 assists, after already creating 10 goals this season.

Opponents QPR were humbled by Swansea last time out, but Harry Redknapp’s side have kept clean sheets in each of their last three games at home in the Premier League.

With nearest rival Luis Suarez not featuring this weekend, Manchester United striker Robin Van Persie has an excellent chance of extending his lead over the Uruguayan striker.

The Premier League’s most in-form player has scored four goals in his last three league games for Tottenham and similarly to Walcott and Michu, Bale has found himself in a far more advanced role for his club this season.

With Tottenham still chasing a top four finish, Andre Villas-Boas will continue to field the Welsh midfielder and the Spurs star is likely to feature heavily in both the Europa League and Premier League this season.

Bale picked up nine points against West Ham in the reverse fixture and the Wales international is Gameweek 27’s most in-form selection for the captain’s armband.

Newcastle’s January signing from Toulouse has been a big part of the Magpies recent upturn in fortunes and the French midfielder has scored or assisted in every Premier League game so far.

Sissoko has been an instant revelation for manager Alan Pardew and the France international had been an ever-present for Toulouse for the past five seasons in Ligue 1.

Newcastle enjoy games against Southampton, Swansea, Stoke, Wigan and Fulham over the next six gameweeks and Sissoko could provide fantasy managers with an immediate return in fantasy points.

Two goals in two gameweeks has propelled Wigan’s Shaun Maloney onto the fantasy radar and the Scotland international is an ideal budget price addition to many fantasy teams.

The Scottish midfielder is enjoying his best ever return in the Premier League with four goals and six assists and the former Aston Villa and Celtic player has been an important part of Roberto Martinez’s side this season.

Like Newcastle, Wigan also enjoy a good set of fixtures over the next six gameweeks with Reading, Newcastle, Norwich and QPR all coming up against the Latics and Maloney looks well poised to add further points to his current fantasy total.