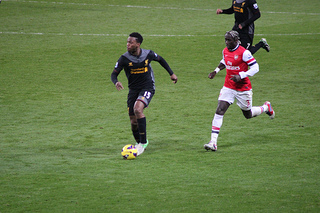 Moussa Sissoko’s 15 points for Newcastle were the pick of Gameweek 25 as the Magpies produced the shock of the round with victory over Chelsea.

Christian Benteke continued his fine form for Aston Villa , but the Belgium striker’s two goals were cancelled out by another Belgium international, as Marouane Fellaini picked up a brace of his own, in an entertaining 3-3 draw at Goodison Park.

Elsewhere a late strike from Gareth Bale secured all three points for Tottenham at the Hawthorns and a brace from Jimmy Kebe kept Reading’s recent resurgence alive with a 2-1 victory over Sunderland.

Both Liverpool and Swansea feature twice during Gameweek 26.

Luis Suarez has scored six goals in his last six league appearances for Liverpool and the Uruguay international is just one strike away from Premier League top scorer Robin Van Persie.

Suarez has attempted more shots on goal (139) than any other player and the Liverpool forward’s interplay and skill in the final third has resulted in 282 penalty box touches, almost twice as many as Manchester United’s Robin Van Persie and Manchester City’s Sergio Aguero.

Liverpool enjoy a double gameweek this week with two home ties against West Brom and Swansea and Suarez looks well poised to make the most of the Reds bonus fixture.

Daniel Sturridge’s impressive form for Liverpool continued last weekend with a goal in the 2-2 draw against champions Manchester City.

The England international has scored three goals in just four Premier League appearances for Liverpool since arriving from Chelsea and the England forward remains the best value option for fantasy managers looking to capitalise on the Reds double run of fixtures this gameweek.

Sturridge has found himself in a more advanced role than many had expected at Liverpool, with Uruguayan forward Luis Suarez operating in a slightly more reserved role.

Although missing from England’s international friendly against Brazil on Wednesday, Sturridge looks an assured pick for both matches this gameweek.

One of the most in-form defenders in the league currently is that of Swansea City full-back Ben Davies.

Injury to Neil Taylor has given Davies an unexpected run in the first team and the Wales international has helped the Swans pick up seven clean sheets in total this season including three in Swansea’s last four away games in the league.

A goal in Gameweek 22 against Stoke highlighted the 19-year old’s emerging potential and the double gameweek this week makes Davies an attractive budget price transfer for many fantasy managers this round.

Juan Mata was powerless to help Chelsea avoid defeat last weekend, despite scoring in three consecutive games for the club.

Only Newcastle’s Moussa Sissoko can better Mata’s current recent form and the Spain international has once again proved to be the Blues’ best player for the second season running.

Ten goals and 12 assists has been Mata’s contribution this season and only Manchester United’s Robin Van Persie can better Mata’s current total of 157 points in the Premier League.

Chelsea’s next six fixtures include games against Wigan, West Brom, Fulham, West Ham and Southampton and the Spanish midfielder could well be a prominent choice for the captain’s armband over the next few weeks.