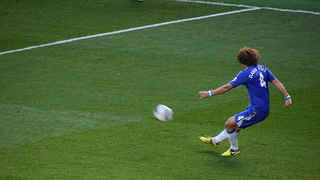 Premier League top scorer Michu extended his lead at the top of the goalscoring charts, as leaders Manchester United could only manage a draw at the Liberty Stadium.

Chelsea put eight past Aston Villa on Sunday; David Luiz scoring the pick of the goals with a thunderous free-kick.

Elsewhere Sunderland’s Steven Fletcher was back on the scoresheet, whilst West Brom halted Norwich’s recent good run thanks to a late Romelu Lukaku header.

Arsenal and West Ham do not feature on Boxing Day due to industrial action on the London Underground.

The Premier League’s top marksman continued his claims for the Golden Boot with an equalising goal on Sunday, as Swansea held Manchester United to a 1-1 draw at the Liberty Stadium.

Only Marouane Fellaini has made more headed goal attempts than Michu (19) and the Swans‘ summer signing from Rayo Vallecano has been increasingly used in the number nine role by manager Michael Laudrup.

Michu has scored seven goals in his last seven league appearances for Swansea and the Spanish midfielder could be a target for many sides in January, with the player being eligible for European competition.

Opponents Reading have the worst defensive record in the Premier League and in-form Michu will again be Swansea’s main threat.

Sunday’s encounter with Swansea was the first time Robin Van Persie had failed to score in five Premier League matches.

The Dutch striker continued to illustrate his worth to his new side however, with a curling corner for Patrice Evra’s opener at the Liberty Stadium and the Netherlands international looks capable of surpassing his tally of 13 assists in the league for Arsenal last season.

Visitors Newcastle have not recorded a win on the road and the Magpies are also yet to keep a clean sheet away from St James’ Park.

Van Persie was on the scoresheet against Newcastle in March for former club Arsenal and the clinical striker will be looking to get back to scoring ways on Wednesday.

David Luiz scored a ferocious free kick as Chelsea humiliated Aston Villa 8-0 last weekend and the Brazil international appears to look far more comfortable and expressive playing in front of a back four for the Blues than in a centre-back position.

Luiz carries a threat in the air and the player has all the attributes to match the style and aggression of Marouane Fellaini in the Premier League.

Opponents Norwich surrendered their fine run of form against West Brom on Saturday and Chelsea will be in bouayant mood when they visit Carrow Road on Wednesday.

QPR manager Harry Redknapp has questioned the money that some of his players at Loftus Road are earning and Moroccan international Adel Taarabt will be keen to put in a few good performances before leaving for the Africa Cup of Nations in January.

Taarabt’s contribution in QPR’s last home game was described by his manager as “one of the all-time great performances” and both player and manager would have earmarked Wednesday’s encounter with West Brom as a chance to pick up some valuable points in the league.

The Baggies are yet to keep a clean sheet away from the Hawthorns and Taarabt should be the main protagonist for QPR on Boxing Day.