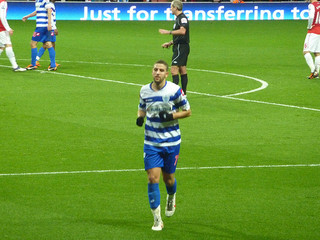 A hat-trick from Santi Cazorla gave Arsenal a much needed victory against Reading after a thrilling 5-2 victory at the Madejski Stadium on Monday night.

Elsewhere Yaya Toure scored for the second gameweek in a row as Manchester City beat Newcastle and Robin Van Persie brought himself to within one strike of Premier League top scorer Michu after netting in Manchester United’s 3-1 victory over Sunderland.

Argentine forward Carlos Tevez has been involved in more than half  (17) of Manchester City’s goals this season and the enthusiastic striker will be hoping to again feature for Roberto Mancini this weekend.

The increasing isolation of Mario Balotelli will only strengthen Tevez’s claims for a starting spot, whose seven goals and ten assists have helped the Citizens keep up with city rivals Manchester United.

Only bottom side Reading have a worst defensive record than hosts Wigan and Tevez will be putting the Latics back-line under severe examination on Saturday.

Robin Van Persie continues to chase down Michu and the two players go head to head this weekend as Swansea host Manchester United.

The Dutch striker is in superb form for the Red Devils and the Netherlands international has found the net in each of his last four league appearances for the club.

Hosts Swansea have been impressive under Michael Laudrup, but last season’s defensive solidity in Wales seems a distant past, as 14 of Swansea’s 22 goals have been conceded at home.

Van Persie netted in the league at the Liberty Stadium earlier this year for Arsenal and the Dutch marksman will be eager to bring himself level with Michu on Sunday.

Manager Harry Redknapp described Adel Taarabt’s contribution last weekend as “one of the all-time great performances” and the EA SPORTS Player Performance Index was in full agreement handing out three bonus points to the Moroccan international.

Taarabt is likely to be a key player for Redknapp over the coming weeks, but the midfielder looks set to be missing from action in January due to the Africa Cup of Nations tournament.

The enigmatic midfielder appears to be creeping into form after an assist in Gameweek 16, whilst opponents Newcastle have kept just one clean sheet in the last 12 games in the league.

Jan Vertonghen’s second goal of the season was enough to send Tottenham back into the Premier League’s top four.

Highlighted in our pre-season fantasy football tips, Vertonghen’s versatility has been useful to Andre Villas-Boas following the lengthy injury to left back Benoit Assou-Ekotto and the Belgium international clearly has an eye for goal after scoring 10 goals for Ajax last season.

Tottenham recorded their second clean sheet in three gameweeks last weekend and the visit of Stoke should give Spurs every chance of picking up their fourth clean sheet of the season.