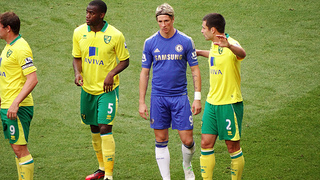 Sebastian Bassong’s third goal in four gameweeks helped Norwich secure an impressive win at Swansea, but it was Spanish midfielder Michu who stole the limelight with two goals.

Ryan Shawcross helped Stoke pick up their eighth clean sheet of the season in a goalless draw at Villa Park, whilst Fernando Torres scored twice at the Stadium of Light as Chelsea defeated Sunderland.

Both Chelsea and Southampton do not feature in Gameweek 17 due to the European champions involvement in the Club World Cup in Japan.

Manchester United’s leading marksman has scored in each of the last three gameweeks and the Netherlands international has one of the best conversion rates in the Premier League.

The Red Devils boast a good set of fixtures over the busy Christmas period and the former Arsenal striker will enjoy plenty of opportunity to assert himself at the top of the scoring charts.

Uruguayan forward Luis Suarez returns to the Liverpool line-up after serving out a one match suspension last weekend.

No striker has attempted more shots on goal (89) or had more penalty box touches (171) than Suarez, but the Liverpool striker has not found the back of the net since Gameweek 12.

Opponents Aston Villa have looked better of late, but the visitors have kept just one clean sheet on the road in the league this season, conceding 15 goals away from home.

Suarez netted in this fixture last season and the Uruguay international is again the most likely candidate to score for Liverpool.

Seven bonus points in the last four gameweeks highlights the improved performances of the English striker and Rooney will again to be the one to watch on Saturday as Manchester United host Sunderland.

Opponents Sunderland have gone three away games without registering a clean sheet and Martin O’Neill’s side will have to contend with the form and hunger of the England international.

Robert Snodgrass’ match-winning performance at the Liberty Stadium earned the Scotland international a spot in the Premier League Dream Team for Gameweek 16 with 16 points.

The Scottish midfielder scored his second goal in three league games last weekend and the price tag of £5.9m will appeal to many managers given Norwich’s run of form in the league.

Snodgrass has featured in all but one game for Chris Hughton in the league this season and the former Leeds midfielder could enjoy the visit of Wigan, who have conceded 13 goals away from home.

Chris Hughton’s transformation of the Norwich back line has been key to the Canaries’ success this season and the Cameroon defender has been an integral part of Hughton’s plans.

Only Shawcross, Baines and Ivanovic have scored more points than Bassong this season and the Norwich City centre back has every chance of overtaking his Premier League counterparts this weekend.

Opponents Wigan have failed to score in four of seven away games in the league and in-form Norwich look more than capable of registering their sixth clean sheet of the season on Saturday.