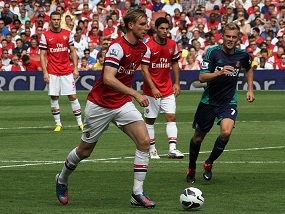 Everton’s Leighton Baines once again illustrated his worth as one of the leading fantasy football defenders in the Premier League last season, with a return of 177 points.

Sportingly Better takes a look at the best value defensive options ahead of the new season, as Arsenal’s Per Mertesacker finds early interest.

Southampton full backs Nathaniel Clyne (£4.5m) and Luke Shaw (£4.5m) are the pick of the budget-priced options in defence, with both players certain of game time under Mauricio Pochettino.

West Ham’s rotation pairing with Southampton could lead to further interest in Hammers defenders James Collins (£4.5m) and Razvan Rat (£5.0m), with the defensive combination notably cheaper than that of goalkeepers Ruddy/Jaaskelainen.

Cardiff picked up 18 clean sheets during their title-winning campaign last term, but a replication of the central defenders goal tallies last season could make either player a stellar investment over the course of the season.

At Norwich, both Javier Garrido (£4.5m) and Michael Turner (£4.5m) offer a good route into the Canaries defence, but Martin Olsson’s arrival at Carrow Road does provide Garrido with real competition at left-back. Turner is also cheaper than goalkeeper John Ruddy and taking Norwich’s opening fixtures into consideration; it is Turner who appears to be the best bet for Chris Hughton’s side.

Further north and Newcastle’s Steven Taylor (£4.5m) and Mapou Yanga-Mbiwa (£4.5m) could provide significant value for the Magpies defence should the club recapture it’s defensive record of two years ago. With Fabricio Coloccini (£5.0m) assured of starts, it remains to be seen whether Taylor or Yanga-Mbiwa will partner the Argentina international in the heart of the Newcastle defence.

Within the mid-price range and Arsenal’s Per Mertesacker (£5.5m) will be looking to build upon his impressive return of 135 points from last season, with the German centre-back assured of game time under manager Arsene Wenger.

Bacary Sagna (£5.5m) also appears to be a solid selection at right back, but defenders Laurent Koscielny (£5.5m) and Thomas Vermaelen (£5.5m) will have to battle it out to become Mertesacker’s preferred partner in the centre of the Arsenal defence.

Elsewhere Everton’s Seamus Coleman (£5.5m) has the potential to be one of the bargains of the season should Roberto Martinez deploy his favoured 3-4-3 formation. Coleman and Leighton Baines (£7.5m) could be pushed into highly advanced wingback roles; leaving the full-backs with plenty of attacking opportunities.

Meanwhile Martin Skrtel (£5.5m) and Kolo Toure (£5.0m) will battle it out to partner Daniel Agger (£6.0m) in the heart of Liverpool’s defence, with the Reds return of 16 clean sheets last season boding well for the season ahead.

Ashley Williams (£5.0m) could also be in line for a big season at Swansea. Williams failed to score during the whole of the campaign for the Swans last season, but the Welsh defender would have still finished as the fourth highest scoring defender last season if the new Bonus Points System had been introduced.

French defender Younes Kaboul (£5.0m) remains perhaps the best way to get into Tottenham’s back-line given the more costlier choices of Hugo Lloris (£6.0m), Jan Vertonghen (£7.0m) and Kyle Walker (£6.0m). Spurs’ high defensive line would lean towards the inclusion of Kaboul in the Tottenham defence, rather than that of English defenders Michael Dawson and Steven Caulker.

Elsewhere Erik Pieters (£5.0m) and Fernando Amorebieta (£4.5m) remain the best bets for Stoke and Fulham respectively, despite Sascha Reither‘s (£5.0m) displays for the Cottagers from right back last season.

Last year’s top-performing defender Leighton Baines (£7.5m) is well poised to capitalise on Everton’s expected switch to a 3-4-3 formation, with the England left-back’s free-kicks and spot kick duties crucial in pushing the defender over the 150 points mark this season.

Elsewhere Chelsea defenders Branislav Ivanovic (£6.5m) and David Luiz (£6.5m) are sure to entice managers with their attacking potential from the back, but it’s Spanish full back Cesar Azpilicueta (£6.0m) who could offer the best value after a debut season, which produced six assists.

Pablo Zabaleta (£6.0m) and Vincent Kompany (£6.5m) appear to be the most assured players of game time under Manuel Pellegrini, but the Chilean manager’s promise of more attacking intent could see the amount of clean sheets for the Citizens fall. Meanwhile Matija Nastasic‘s (£5.5m) injury leaves Zabaleta as the most appealing defensive option for the Premier League runners up.

Finally, Tottenham’s Jan Vertonghen (£7.0m) could be in for a promising season, after producing five goals and three assists during his debut campaign in the English top flight. Vertonghen would have finished below only Robin Van Persie had the new Bonus Points System been introduced last season, but a fee of £7.0m may be deemed too much by many fantasy managers this time around.