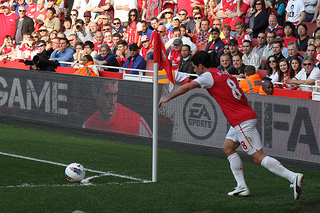 With fantasy managers making their first drafts ahead of the 2012/2013 fantasy football season, Sportingly Better analyses the key set-piece takers in the Premier League and takes a look at the players who could score you points.

With Arsenal’s Robin Van Persie looking increasingly likely of securing a move away from the Emirates Stadium, former Everton midfielder Mikel Arteta appears to be the prime candidate to take over the Dutch forwards set-piece duties.

Priced at £8.0m, Arteta finished 2011/2012 on 128 points with seven goals, two assists and 21 bonus points despite further injury problems, which will again be the main question mark over the Spaniard this term. Arteta has only once in six seasons finished with less than 100 fantasy points and the former Barcelona trainee will be largely responsible for the Gunners corners, set pieces and penalties assuming Van Persie moves on.

Baines’ set-piece duties for Everton leaves the England left back priced at an inflated £7.0m, with only Manchester City captain Vincent Kompany priced higher. Baines has scored more than 130 points in each of the last three seasons in the Premier League, with the defender largely unchallenged in his spot duties for David Moyes’ side. Baines has been linked with a summer move to Manchester United, but looks set to be priced out of a move to Old Trafford this summer.

Gambled by many fantasy managers last season, the Moroccan play-maker will be hoping for a change in fortunes this time around. Taarabt secured a somewhat disappointing tally of 86 points during the 2011/2012 season picking up two goals, four assists and 14 bonus points. Despite a raft of competition on the penalty front, QPR’s free kick and corner kick duties look set to be the domain of the Adel Taarabt this season, with Joey Barton serving a lengthy ban. The former Tottenham midfielder is priced at £6.0m with many expecting an improved campaign from Mark Hughes’ side.

Sebastian Larsson’s impressive campaign last season saw the right-sided midfielder come away with 128 fantasy points. The lack of signings up front are a negative for the Swedish midfielders potential this season, but expect that to change if Martin O’Neil secures his targets in attack such as Wolves’ Steven Fletcher.

Newly promoted Reading may struggle this season but left back’s Ian Harte and Nicky Shorey could have a productive season with summer signing Pavel Pogrebnyak the main target from set-pieces.

Despite the arrival of Jonathan De Guzman, Swansea midfielder Scott Sinclair should retain his place as number one penalty taker for the Welsh side, despite his own admission that it is getting harder for him to score from the spot.

Eden Hazard scored a large number of goals from the spot for Lille last season, but the Belgian midfielder faces stiff competition from Frank Lampard and Juan Mata who are both keen penalty takers.

Adam Lallana and Rickie Lambert will again appear to be the main chieftains for Neil Adkin’s side, whilst Mark Noble, Kevin Nolan and Matty Taylor will fight it out for West Ham.

Chris Brunt appears to be the focal part of set-pieces for West Brom after picking up eight assists last season, whilst Gylfi Sigurdsson will provide competition for Rafael Van der Vaart who himself has been the subject of speculation amidst a move away from White Hart Lane.

Paul Lambert’s Aston Villa have impressed during pre-season and Darren Bent should capitalise on Villa’s good early season fixtures, boosted by his penalty duties for the Midlands club.