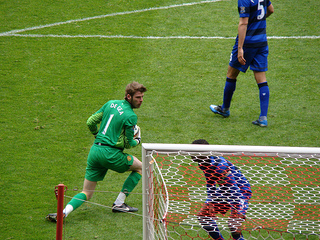 Spain’s early exit at the London 2012 Olympic Games has seen renewed interest in the Manchester United goalkeeper who was expected to miss the first few games of season after his involvement with the U23 squad. De Gea was widely criticised coming into the Premier League with his presence and command of the penalty box coming into question. After a spell out of the side De Gea proved his shot-stopping ability for the Red Devils with only Wayne Hennessey and Michel Vorm making more saves per minute than the former Atletico Madrid goalkeeper.

De Gea finished the 2011/2012 season with 13 clean sheets and 134 fantasy points, but the return of Nemanja Vidic to the Manchester United back-line should increase the potential of further clean sheets and points this season, despite competition from Anders Lindegaard.

England’s first choice goalkeeper finished last season with 166 points; more than any other keeper in the Premier League. Backed by the defensive cover of De Jong and Barry in front of Kompany and Lescott, Hart went on to pick up 17 clean sheets, one fewer than in 2010/2011.

Unlike De Gea, Joe Hart’s position in the Manchester City goal is largely unchallenged, for now at least, with Thibaut Courtois back at Atletico Madrid for a second spell on loan. Roberto Mancini’s tactics and dominance at the Etihad Stadium largely aid Hart’s propensity to pick up clean sheets at home and the England goalkeeper is expected to have another fine season between the sticks for the Citizens.

Rumours of Hugo Lloris joining Andre Villas-Boas at Tottenham may have dampened the appeal of the American goalkeeper, but thePremier League veteran Brad Friedel should again find himself between the sticks at White Hart Lane.

Priced at £5.5m, Friedel represents the best way into the Spurs back-line with the likes of Walker and Assou-Ekotto both priced at £6.5m. The arrival of Ajax’s Jan Vertonghen will strengthen Tottenham’s defence following the retirement of Ledley King, whilst Steven Caulker returns to London after completing a beneficial year on loan at Swansea. Friedel is a consistent big hitter in the Premier League and has scored more than 135 points in five of the last six Premier League seasons.

Another American goalkeeper, Tim Howard offers little in the threat of being challenged for the Everton goalkeepers jersey. Howard started every league game for the Toffees last season in the Premier League and went on to record 12 clean sheets and 151 fantasy points.

Everton maintained their end of season dash up the table and conceded just two goals in the last eight games at Goodison Park and Howard’s selection should be a reliable and safe one for fantasy managers.

Traditionally many fantasy managers selected a big hitting goalkeeper from one of the top Premier League clubs and supplemented this with a basement-buy goalkeeper. The theory being that you are always going to select the likes of Petr Cech, Joe Hart, David De Gea or Pepe Reina ahead of any other goalkeeper, so why waste valuable transfer budget on someone who will never be played?

The new school of thought however is quite different. The theory being that two mid-priced goalkeepers (who regularly play for their clubs) over a course of the season will secure more clean sheets and more points than the big-hitting goalkeeper alone. Having the option of two starting goalkeepers allows fantasy managers the flexibility to navigate through difficult fixtures when the big clubs face each other as much as it does during gameweeks when one of your goalkeepers will not feature.

The method worked extremely well last season with Tim Krul and Michel Vorm. Both goalkeepers were regular starters for their clubs and the fixture list of Newcastle and Swansea rotated almost perfectly, with Vorm playing at the Liberty Stadium one gameweek  followed by Krul featuring at St James Park the week after.

There are some good pairings this season of goalkeepers who work well in relation to how their club fixtures rotate.

– Federici and Jaaskelainen works well for the early part of the season with 10 home matches in the first 11 gameweeks and the pairing will set you back £9.0m.

– Tim Krul is another who works well with Adam Federici’s fixtures for Reading as does West Brom’s Ben Foster.

– Fulham’s Mark Schwarzer and QPR’s Rob Green alternate well, whose sides should both enjoy more comfortable campaign’s this time around.

– Green and Friedel combine well with both goalkeepers providing an easier way into more expensive defences.

– Manchester United’s David De Gea and Reading’s Adam Federici also rotate well should you want to have the option of rotating De Gea when faced with stiff opposition.