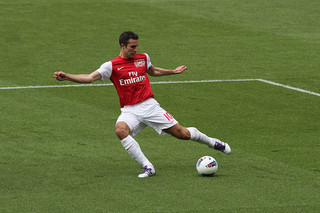 The England international endured a frustrating term last season with injury leading the Aston Villa striker to start just 22 games for the Midlands club. The tactics and service the forward received under Alex McLeish’s stewardship undoubtedly hindered the striker’s return, but the arrival of the attack-minded Paul Lambert will be a big boost to Bent’s chances this season.

Aston Villa have been playing well in pre-season with Stephen Ireland and Charles N’Zogbia reinvigorated in midfield and the service to Bent should markedly improve. The striker should surpass his 2011/2012 tally of nine goals, with Villa enjoying favourable fixtures early on.

One of the most impressive pre-season form of any player in the Premier League has been that of Croatian Mladen Petric. Signed on a free transfer after his release from Hamburg, Petric scored 38 goals in 98 appearances in four years at the club and may get someway to double figures in his first season under Martin Jol.

Fellow new arrival Hugo Rodallega may pick up some game time in attack, but it is Petric who is expected to be favoured by Martin Jol up front for the Cottagers.

After arriving in the January transfer window, Nikica Jelavic played 10 games in the second half of the season scoring nine goals and racking up 11 bonus points.

The Croat striker is again expected to be the focal point in Everton’s 4-5-1 formation and will link-up with former striking partner Steven Naismith from Rangers. The departure of Australian Tim Cahill is a slight negative, but Jelavic should feature heavily for the Toffees this season under David Moyes.

Lambert played his part in almost half of Southampton’s 85 goals last season, finishing as the Championship top goalscorer with 27 goals. Fourteen assists illustrates the front man’s all-round play, with the enigmatic striker also Southampton’s main penalty taker. Lambert should feature heavily for newly promoted Southampton this season despite the arrival of Jay Rodriguez from Burnley.

The departure of Didier Drogba will perhaps be the biggest swing for the fortune of Fernando Torres this season. The pair seemingly could not co-exist last season and the lack of depth in attack for Chelsea suggests that Torres should feature heavily this time around.

Priced at £10.0m Torres comes in at £3.0m cheaper than Van Persie and £2.0m cheaper than Rooney. The arrival of Oscar and Hazard along with Mata, Lampard and Ramires should give Torres plenty of support, with Chelsea starting a double Gameweek against Wigan and Reading.

Pogrebnyak’s displays for Fulham towards the second half of the season earned the Russian striker eight bonus points after scoring six goals in 12 games.

The move to Reading offers Pogrebnyak a starring role in Brian McDermott’s side and the Russian should feature substantially at the Madejski Stadium this season. With penalties a possibility, Pogrebnyak’s price of £5.0m should entice many fantasy managers to opt for the Russian international.

With bonus points heavily weighted to the attackers, investing in a strong forward line is more than just glamorous fantasy shopping, but essential for selecting the captain’s armband.

It’s important to consider rotating home form for your strikers. Both Aguero and Rooney performed far more strongly at home than on the road last season.

Opting for a City/United front-line is ideal this season with the home and away fixtures rotating perfectly, with Rooney and Aguero combination a strong option for fantasy managers.