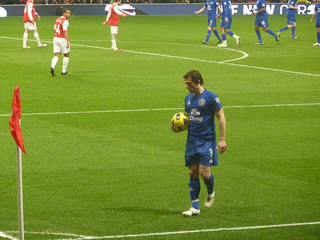 Last season Manchester United’s Patrice Evra finished the 2011/2012 Premier League season with more points than any other defender, whilst Vincent Kompany, Kyle Walker, John Terry, Benoit Assou-Ekotto and Leighton Baines all impressed. Sportingly Better analyses the choices in defence and picks out some potential bargains at the back.

A traditional source of goals at the back for the Cottagers, Hangeland failed to find the net last season. The Norwegian centre back played every minute for Martin Jol’s side last season and looks set again to feature heavily this campaign.

Hangeland’s lack of goals in the Premier League last season resulted in the Fulham defender priced at just £5.0m this time around and with Mark Schwarzer between the sticks and Aaron Hughes providing the central defensive partnership, that price looks to hold plenty of value for the defender who scored six goals in the Premier League two years ago.

Linked with a summer move to Old Trafford, Everton’s Leighton Baines a favourite of many fantasy managers.

Baines will again feature heavily for David Moyes’ side and the former Wigan defender will find himself at the forefront of all the Toffee’s set-pieces including penalty kicks.  Whilst the £7.0m price tag will likely deter many, the assists and goals the left-back could return makes Baines potentially one of the highest point scorers for a defender in the league.

Koscielny will likely be outscored by Thomas Vermaelen, but at £5.5m, Koscielny comes in at £1.5m cheaper than the Belgian. Koscielny should again feature substantially this season, ahead of the more cumbersome Per Mertesacker, although many fantasy managers may point to Wojciech Szczesny at the same price, who could pick up a few more points.

With European football off the agenda at the Britannia Stadium, Stoke’s Ryan Shawcross could be in-line for a bigger points haul this time around.

The former Manchester United defender played 36 games in the league for Tony Pulis’ side last season and the England centre-back is again expected to form a solid partnership with German Robert Huth, who he outscored last term. Shawcross has scored two or more goals in three of the last four Premier League seasons and the Stoke City defender should return plenty of points for fantasy managers this season.

The lack of a natural full-back within the Sunderland set-up, should leave another former Manchester United defender with plenty of game time this season.

The potential for goals and assists will appeal, with the defender managing three goals and two assists two seasons ago. Bardsley offers a good value route into Martin O’Neill’s line-up as Sunderland attempt to consolidate their league standing from last season.

Patrice Evra was the only defender to feature in the top 20 Fantasy Premier League rankings last season, with many fantasy managers again opting to lower their transfer spend on the defence.

Manchester United and Manchester City were the only sides to consistently keep clean sheets, with the likes of Liverpool, Arsenal, Tottenham and Chelsea all failing to regularly register shut outs. Newcastle and Swansea’s back-line offered some value, but the main selections were with the goalkeepers Krul and Vorm.

Value again may be with similar sides, who enjoy good home form and are well set-up. QPR and Everton both enjoyed clean sheets towards the end of the season and could enjoy some success defensively this season.

With goals drying up for the likes of Huth, Hangeland, Terry and Vermaelen, the emphasis of most fantasy managers may be towards a more thrifty back-line this time out to allow funds on the midfield and forward positions.