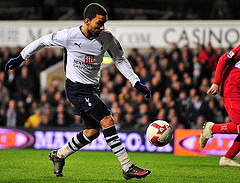 The Premier League makes way for the FA Cup this weekend, but a number of all-Premiership ties are still on offer.

This week our English football predictions come from Cheshire as Championship leaders Cardiff take on Macclesfield and London as Tottenham entertain Coventry at White Hart Lane.

Championship leaders Cardiff take on Blue Square Premier’s Macclesfield at Moss Rose on Saturday looking to extend their winning run to five matches in all competitions.

The Bluebirds are seven points clear at the top of the Championship and manager Malky Mackay may choose to rest and rotate his squad with David Marshall, Craig Bellamy and captain Mark Hudson all making way. Joe Lewis, Joe Mason, Jordan Mutch, Nicky Maynard, Tommy Smith and Bo-Kyung Kim could all be in-line for starts in the third round match as Cardiff go in search of their fourth successive win over Macclesfield.

Hosts Macclesfield have won only two of their last 11 games in all competitions and Steve King’s side look consigned in mid-table.

The Silkmen are without the suspended Ryan Jackson, whilst striker Matthew Barnes-Homer is a doubt. Macclesfield defeated Blue Square Premier side Barrow 4-1 in the second round after the original fixture ended all square.

Championship leaders Cardiff will be keen to put in a professional performance on Saturday and keep their momentum going into the fourth round of the FA Cup.

The loss of League One top scorer David McGoldrick is a huge blow for the Sky Blues, but the arrival of Leon Clarke from Charlton will go someway to immediately appease that gap. Clarke scored 11 goals in 15 games for Scunthorpe this season and Mark Robins will be hopeful for a similar return for Coventry who are the League One’s top goal scorers.

The Sky Blues have been well drilled on the road winning seven of 13 away matches in League One, but the trip to White Hart Lane will be an altogether more difficult affair.

Tottenham currently sit in third place in the Premiership and the Europa League hopefuls will be hoping to secure their passage into the fourth round of the FA Cup on Saturday.

Scott Parker looks set to make his first start of the season whilst Benoit Assou-Ekotto could also return from injury. Veteran goalkeeper Brad Friedel will likely find himself between the sticks, with Tom Huddlestone, Kyle Naughton, Emmanuel Adebayor and Gylfi Sigurdsson all in-line for starts. Spurs are chasing their fifth win in six games in all competitions.

Tottenham have won five of their last six matches against Coventry and Andre Villas-Boas’ side look set to come out on top in an entertaining encounter at White Hart Lane.

Recommended Bets
Tottenham to win and over 3.5 goals @2.30