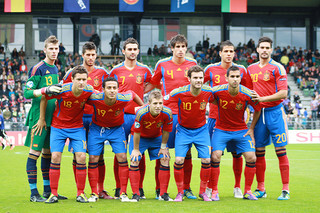 With just two days remaining until the opening match in Netanya, Sportingly Better picks out the best bets and football predictions for the 2013 UEFA European Under-21 Championship in Israel.

Favourites Spain finished top of their qualification group after a run of seven wins from eight games in Group 5 and la Roja’s impressive 8-1 aggregate victory against Denmark in the play offs makes Julen Lopetegui’s team the side to beat in Israel.

Benfica striker Rodrigo scored 11 goals during the qualifiers and the Brazilian-born forward remains a good each-way bet to finish the 2013 tournament as the tournament’s top scorer.

Spain boast a burgeoning roster of talent with Golden Boy winner Isco threatening to become the star name in this year’s edition, whilst the likes of Iker Munian, Thiago, Pablo Sarabia, Asier Irramendi and Sergio Canales are all more than capable of complimenting the attack.

Spain lifted the Under-21 title two years ago in Denmark and la Roja have been rightly priced as the clear favourites going into the 2013 competition.

Germany Under-21’s attack-minded displays during the group qualifiers produced a total of 39 goals in Group 1 and a 4-2 aggregate win over Switzerland in the play offs saw Rainer Adrion’s side book their place into the European Under-21 Championship finals.

The likes of Julian Draxler, Moritz Leitner and Ilkay Gundogan are all missing from the party and despite the presence of Tottenham midfielder Lewis Holtby, it is a largely unknown squad that has travelled to Israel.

Germany failed to qualify for the tournament two years ago and despite Germany’s attacking intentions, Rainer Adrion’s side could be the big name to be ousted from Group B.

Record five-times winners Italy secured their passage to Israel after a 4-2 aggregate win over Sweden in October and the Azzurrini’s highly experienced squad are expected to comfortably progress from their group in June.

Head coach Devis Mangia has named just two uncapped players in his 23-man squad, but it is the partnership of Luca Marrone and Marco Verratti in midfield that could be key for Italy.

A predominantly Serie B-based back line is the main worry for the Azzurrini, but the Italian’s protection in front of the defence should see the Italians book their place into the semi-finals, with former Pescara graduates Marco Verratti, Ciro Immobile and Lorenzo Insigne all players to look out for.

England go into the tournament on a run of nine consecutive wins without conceding a goal and manager Stuart Pearce will be charged with at least making the semi-finals, after drawing Norway, Italy and hosts Israel in Group A.

A lack of goals remains England’s main concern going into the tournament, with defender Craig Dawson finishing qualification as England’s top scorer, but forwards Wilfried Zaha and Tom Ince have both had impressive goalscoring campaigns in the Championship this season.

England failed to make it out of the group stage two years ago in Denmark, but Stuart Pearce’s side should at least better that mark this time around in Israel.

Netherlands coach Cor Pot has named an experienced side for the 2013 tournament and the Jong Oranje remain real contenders for this summer’s European Under-21 Championship.

The likes of Luuk de Jong, Kevin Strootman, Leroy Fer, Stefan de Vrij and Georginio Wijnaldum have all been included, with Pot’s squad boasting a total of 63 senior caps between them.

Holland have not managed to qualify for the last two editions of the European Under-21 Championship, but the Jong Oranje are being widely billed as outsiders for this summer’s competition in Israel.

Recommended Bets
Back Netherlands to qualify from the group stage @2.10
Back Spain to win the European Under-21 Championship @2.87
Back Rodrigo each-way to be the top goalscorer @10.00