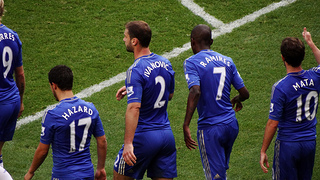 Atletico Madrid’s exit from the Europa League in the last round means a new champion will be crowned on the 15th May, ending los Rojiblancos chance of making it three wins in the last four years of the tournament.

Chelsea are the current favourites after exiting the Champions League and they continue to produce results despite a lack of stylish performances in Europe this season.

Local rivals Tottenham are hot on their trail as manager Andre Villas-Boas continues to push Spurs towards Europa League glory, whilst Russia have a great chance of producing the winning country in the tournament with both Zenit St Petersburg and Anzhi still in the mix. A win for either side would be an extremely significant landmark considering the current wealth and expenditure in Russian football.

Football columnist Lewis Doe picks out the remaining teams to watch in this year’s tournament as well as a number of Europa League predictions to follow.

Chelsea look a very decent bet to take the title at 4.75 for several reasons.

The blend between experience and talent helped Chelsea to win the Champions League last season as they defeated Bayern Munich in the final and that recent taste of European success could present the Blues with a great chance of hitting back against their heavy number of critics.

Rafa Benitez’s side defeated Sparta Prague over two legs 2-1 to secure their place in the last 16 of the tournament, but during the group stages of the Champions League, Chelsea scored more goals (16) than any other side, suggestng they will be difficult to beat over the remainder of the competition.

Chelsea have a solid core of midfield players in Frank Lampard, Juan Mata, Oscar and Eden Hazard who are all protected via the physical presence of John Obi Mikel and Ramires.

Chelsea have not been playing particularly well at the moment, but the Blues do have a habit of grinding out results and getting the job done, which makes backing the Premier League side a relatively solid option.

Tottenham are arguably the best bet out of all the sides to win the Europa League with odds of around 10.00.

Spurs did not lose a single game during the group stages of the competition, but edging out Lyon in the last round will have given Andre Villas-Boas’ side confidence after failing to get out of the group stage last season.

Tottenham have great stats to back up their second favourite position, having conceded only four goals during the group stages, whilst their domestic home defensive record cannot be bettered by Premier League leaders Manchester United.

Spurs are one of Europe’s most in-form sides with brilliant impact players such as Gareth Bale who are able to take a match away from any side quickly. They are a little short up front with an over reliance on Jermain Defoe, Emmanuel Adebayor and Clint Dempsey, but Tottenham are still producing the results.

Spurs are on the brink of having a truly brilliant season, and the determination and focus within their very talented squad could drive them on even further.

Anzhi Makhachkala are chasing CSKA Moscow at the top of the Russian league, but Europa League success for Dikaya Divisiya will be just reward for the heavy outlay of investment in the side.

Anzhi enjoyed one of the best home records during the group stage of the Europa League, winning all of their matches, without conceding a single goal in the process. Only Anzhi’s inconsistent away form stopped Guus Hiddink’s side from winning the group.

Dikaya Divisiya rely heavily on former Barcelona star Samuel Eto’o who with nine goals is the top scorer in the competition, but Lacina Traore is another prominent figure up front for the Russian side.

Anzhi are worth backing at 10.00 as they can beat anyone on their day, but the emerging pressure on Guus Hiddink’s side will only increase, as the number of potential winners decreases.

Benfica are having a tremendous season domestically and the 3-1 aggregate victory over Bayer Leverkusen in the last round of the Europa League will have buoyed the Portuguese side.

The Aguias have an extremely talented squad which features experienced European players such as Oscar Cardozo, Lima, Eduardo Salvio and Rodrigo, who all feature in the top 15 scorers in the Primeira Liga this season.

Jorge Jesus’ defensive back-line is also strong. Only five goals were conceded as they went out of the Champions League group stage, whilst just 14 goals have been shipped in 20 league matches this season. All of this makes Benfica a very good outside bet at 11.00 to win this tournament.

Inter Milan will still feel bitter that they did not qualify for the Champions League last season, but that could give them a deep determination to play well and progress in this tournament.

Odds of 12.oo look very good for a side that breezed through the group stage of the Europa League, finishing with 11 points behind leaders Rubin Kazan.

Inter are currently fifth in Serie A, down partly to their shaky away form, but when you factor in the likes of Diego Milito, Antonio Cassano, Rodrigo Palacio and Esteban Cambiasso, Andrea Stramaccioni’s side could make a good go at the Europa League this year.

Lazio’s current odds of 21.00 to win this tournament are bound to go shorter because their calibre as one of the best sides in this competition is undoubted. Lazio haven’t tasted European success since 1999 which is remarkable for a club of their level.

The Biancocelesti topped Tottenham’s group, but the striking feature of their play was the fact that they only conceded two goals during those six games.

In attack, striker Libor Kozak shows promise and is one of several players on seven goals, whilst Sergio Floccari has also contributed well with four goals for the club.

Lazio have key experience which they benefit from on and off the filed via the likes of Miroslav Klose, Mauro Zarate and Stefano Mauri and Vladimir Petkovic’s unfancied side could spring a surprise in this year’s tournament.

Lewis Doe is a senior football columnist for Soccerlens.com – one of the best football sites around. For more football tips and insights, follow Soccerlens on Twitter and Facebook.