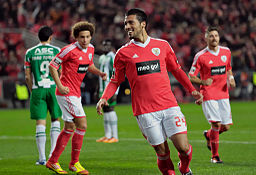 The last-16 of the UEFA Europa League kicks of tonight with English sides Newcastle, Chelsea and Tottenham all still in the mix.

Benfica’s 2-1 aggregate victory over Bayer Leverkusen in the last round strengthened the Aguias claims to go far in this competition, but Jorge Jesus’ side still remain firmly in battle with Porto for the Primeira Liga title.

The clean sheet at the BayArena three weeks ago highlighted the Portuguese league leaders strength at the back and the central defensive partnership of Ezequiel Garay and Luisao  is arguably one of the finest combinations left in the competition.

Benfica are currently top of the Primeira Liga after an unbeaten run of 17 wins and four draws, but Jorge Jesus’ side have been no strangers to goals this season with Oscar Cardozo, Rodrigo, Lima and Eduardo Salvio all flourishing in attack.

Opponents Bordeaux have lost their last four games in Ligue 1, but the French outfit’s Europa League campaign has offered more encouragement, with les Girondins unbeaten in their last six games in the Europa League.

Bordeaux have been set up well by Francis Gillot in this competition, but it is the second leg at the Stade Chaban Delmas, which could prove crucial if the Ligue 1 side are to progress into the quarter finals.

Les Girondins have been woefully short of goals this term and the sale of Yohann Gouffran to Newcastle in January has only exacerbated the problems in attack for Gillot.

Benfica have won 11 of their last 12 matches at home in the Europa League and the Portuguese side should produce a dominant display at the Estadio da Luz tonight.