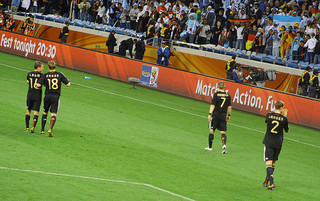 After opening victories against Portugal and Holland, Germany know that a point today will not only be enough to qualify, but also enough to top Euro 2012’s “Group of Death”.

Joachim Loew’s Germany side have successfully overcome arguably the two strongest teams in the group  in Portugal and Holland and will be looking to complete a hat-trick of victories at Euro 2012 against Denmark later today.

Denmark were fortunate to secure victory over Netherlands in the opening game of Group B, with the Dutch side particularly wasteful in attack, despite registering 29 attempts on goal. Morten Olsen will be without winger Dennis Rommedahl whilst Niki Zimling is doubtful, but Die Mannschaft will have to be weary of Nicklas Bendtner who is in good form for Denmark and scored a brace last time out against Portugal.

Jerome Boateng is suspended for Germany after picking up two yellow cards, so Joachim Loew will need to reshuffle the back line. Phillip Lahm could switch to right back pushing Badstuber out to the left with Howedes or Mertesacker choices at centre-half. Loew may however play midfielder Lars Bender at right back and opt to keep the consistency of the German back-line intact.

Including qualification games, Germany have now won their last 12 games in the European Championships and with Gomez firing in the goals, Die Mannschaft look the class act in Group B.