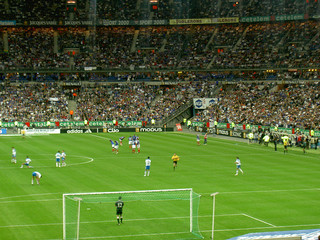 After an opening 1-1 draw with England, France will be looking to pick up all three points against co-hosts Ukraine and take a giant step towards qualification.

France were left frustrated by England’s style of play and Les Bleus also dominated possession. Only the Republic of Ireland had less of the ball than England achieved  from the Euro 2012’s opening games and France should find the match against the Ukraine far more open.

Yann M’Vila looks set to come into the side and replace Alou Diarra, in the only change expected to be made by Laurent Blanc who are on a run of 22 games without defeat.

Ukrainian captain Andriy Shevchenko got the co-hosts campaign off to a flying start and it was his brace that help secured his country’s 2-1 victory over Sweden. Coach Oleg Blohkin has remained cagey about his starting line-up and the Ukraine may play slightly more conservatively after their opening victory.

These two sides met 12 months ago in an international friendly at the Donbass Arena in Donetsk, which France won 4-1 and Les Bleus have the quality to record victory again this time around.