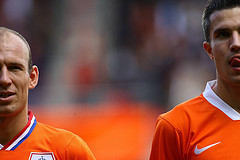 Published on May 28th, 2012 | by Sportingly Better Tipster

Mario Gomez is the favourite to finish Euro 2012 as top goalscorer in Poland and Ukraine this summer, but the German faces stiff competition from around Europe. Gomez, Van Persie, Ronaldo and Benzema are all favoured early on in the Euro 2012 odds by various online bookmakers.

Gomez is an obvious choice for the Golden Boot with the Bayern Munich striker scoring 12 goals in this season’s UEFA Champions League. Gomez has already scored 26 times in the Bundesliga and German coach Joachim Low will undoubtedly feature the striker heavily throughout the tournament. Questions however, were raised about Gomez in the Champions League final, whilst group opponents Holland and Portugal may also limit Gomez’s impact early on.

Spain’s David Villa finished top goalscorer at the last European Championship in Austria and Switzerland, but the Barcelona striker has been ruled out of  Euro 2012 through injury. Vicente Del Bosque called Villa ‘irreplaceable’ , but La Roja will instead have to look to Torres, Llorente and Alvaro Negredo of Sevilla to lead the line. Del Bosque appears to favour Torres over Llorente, whilst the Chelsea striker has a point to prove and will be notably much fresher than Fernando Llorente who endured an entertaining campaign with Athletic Bilbao in the Europa League.

Arsenal’s Robin Van Persie topped the Premier League charts with 30 goals but the Dutchman managed just four goals in Europe’s elite competition. Van Persie is likely to be favoured ahead of Klaas-Jan Huntelaar in attack despite the Schalke striker finishing the season as the Bundesliga’s top scorer with 29 goals. The preference of coach Bert van Marwijk to pick the Arsenal striker is also represented in the betting odds.

Cristiano Ronaldo hit a phenomenal 46 goals in La Liga this term and the former Manchester United player also showed his class in Europe with a further ten goals in this season’s Champions League. Portugal’s captain and leading talisman is the stand out choice for the Seleccao, although Portugal are generally not favoured to progress past the group stage.

Karim Benzema hit 21 goals for Real Madrid in their La Liga winning season and the former Lyon striker also picked up seven goals in Europe to reinforce his international pedigree. Benzema looks set for a starring role in Laurent Blanc’s side and could pick up a few goals early on in Group D against Sweden and the Ukraine.

Of the other contenders, Wayne Rooney’s two match ban leaves the England striker at a significant disadvantage in a largely unpredictable England side. Arsenal bound Lukas Podolski hit 18 goals for FC Cologne during a relegation season, although how much the German will feature for Joachim Low is debatable.

Poland’s Robert Lewandowski remains a strong each way option. The Borussia Dortmund forward is priced at 20/1 and offers good value especially with Poland coming up against Russia, Greece and the Czech Republic in Group A. Lewandowski also hit 22 goals in a double winning season for the German champions.