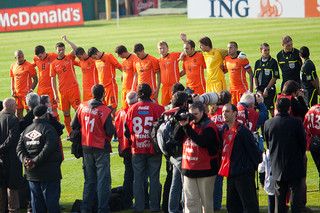 Holland displayed a near faultless qualification record, with defeat to Sweden on the final game of qualification the only blemish.

Bert Van Marwijk has the most prolific strike-force in the tournament with Robin Van Persie of Arsenal and Klaas-Jan Huntelaar of Schalke both vying for a starting berth today. In support Arjen Robben, Wesley Sneijder and Rafael Van der Vaart not only provide a barrage of creativity but also a notable goal threat from midfield. Dutch defender Joris Mathijsen will be missing so Ron Vlaar looks set to partner Johnny Heitinga in central defence, although a reshuffle at the back could see Jetro Willems drafted in at left black with Wilfred Bouma being pushed into the centre of defence.

Denmark did find the back of the net during every qualification game and the Dutch emphasis on attack along with the reshuffle at the back may see Martin Olsen’s side once again scoring. With Thomas Sorensen missing Stephan Andersen looks set to have a busy afternoon in goal and the betting odds on both teams scoring (1.90) and Holland to score two goals or more (1.83) looks appealing.

But Holland have won seven of their last nine group games at the European Championships and with two of Europe’s best strikers at Van Marwijk’s disposal, the Dutch should make a winning start to Euro 2012.