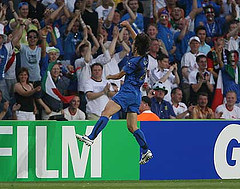 Croatia demonstrated their eye for goal and attacking quality with three goals against the Republic of Ireland in their opening clash in Group C.

Slaven Bilic’s side encountered a poor Irish defence and the chances of similar inept-ability from the Italians is unlikely, despite Daniele De Rossi again being deployed as a make-shift centre back in a 3-5-2 formation. Suggestions are that Croatia will play more conservatively with captain Darijo Srna being pushed up to the right of midfield, but Bilic will still unleash Modric, Jelavic, Kranjar and Mandzukic in attack.

Italy produced a good display against the reigning World and European champions Spain, securing a 1-1 draw. Di Natale scored with a fine finish and may displace Mario Balotelli in the starting line-up. Antonio Cassano also looked lively for the Azzurri.

Eight out of the ten games at this years European Championship have finished with both teams scoring and with Italy’s relatively new formation and the quality of the Croatian attack, both sides should find the back of the net today.