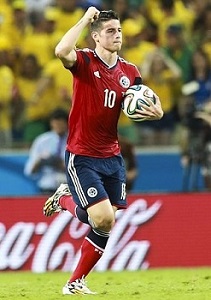 Hosts Chile booked their place into the 2015 Copa America semi -final after a bruising contest with holders Uruguay, with South American giants Argentina and Brazil next up in the Copa America quarter finals.

Both sides have struggled so far in the tournament with Argentina mustering single goal victories over Uruguay and Jamaica which came after an opening 2-2 draw against Paraguay.

Gonzalo Higuain was brought in to rest Sergio Aguero against Jamaica and the Napoli striker took the most of his opportunity with the winning goal.

Colombia’s place at the tournament was salvaged by being one of the best ranked sides who finished the group stages in third position. Los Cafateros have scored just one goal in three games and that goal came in the slender 1-0 victory over Brazil, which sealed their place in the quarter-finals.

Colombia have an obvious strength with their attacking trio of Falcao, Juan Cuadrado and James Rodriguez, but the front line have so far struggled to produce any kind of link up. Manager Jose Pekermen may well opt for a change with Jackson Martinez and Victor Ibarbo waiting in the wings.

With a space in the semi-finals at stake, a largely cagey affair  could be on the cards on Friday.

Brazil just about topped their group after 2-1 victories over Venezuela and Peru. The defeat to Colombia was the most costly as star player Neymar was sent off in the aftermath and was handed a resulting ban that has ruled the player out for the rest of the tournament.

Liverpool’s newest recruit Roberto Firmino will be looking to add to his strike against Peru alongside Willian, Robinho and Philippe Coutinho, whilst defender Thiago Silva is likely to be selected again despite being dropped for the first game of the tournament.

Opponents Paraguay could name largely the same side that started against Uruguay in their last game, but Richard Ortiz is out through suspension. Experienced attackers Lucas Barrios and Nelson Valdez will be tasked with getting in behind Brazil’s backline whenever possible.

Although Paraguay defeated Brazil on their way to the 2011 Copa America final, Brazil look an assured football tip in the last match of the quarter-finals even without their most influential player.