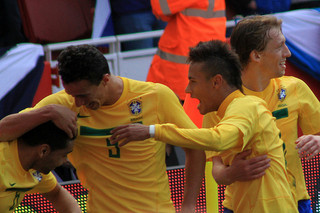 With just two days remaining until the opening match in Brasilia, Sportingly Better picks out the best football predictions and free betting tips for the 2013 Confederations Cup in Brazil.

Hosts Brazil have won just two of their last seven matches on the international stage, but the Selecao will be hoping to extend their excellent record in this competition by lifting their third successive Confederations Cup title.

Coach Luiz Felipe Scolari has named a fairly youthful midfield with both Kaka and Ronaldinho omitted from the squad, so youngsters Fernando and Bernard may have a chance to impress and stake their claim for a place in Scolari’s World Cup squad.

Brazil have won the Confederations Cup on three of the six occasions they have entered the competition and the hugely motivated Selecao will be primed to continue their fine record in this competition.

Second favourites Spain go into the Confederations Cup on the back of winning each of the last three major international tournaments, but la Roja’s defeat to the USA in the semi-finals in 2009 will not be too far away from the player’s minds.

Vicente del Bosque has named three strikers in a largely seasoned squad with only Chelsea’s Cesar Azpilicueta registered under the age of 24, but del Bosque’s preference to play without a striker may see their playing time limited, despite the form of Valencia’s Roberto Soldado.

Spain have won 17 of their last 21 matches on the international stage and the dominant European side look poised to finally lift their first ever Confederations Cup trophy.

European Championship runners up Italy remain unbeaten in 2013, but four draws along with wins over San Marino and Malta will hardly inspire too much confidence going into the tournament.

Coach Cesare Prandelli has named Milanelli strikers Mario Balotelli and Stephan El Shaarawy in what is otherwise an experienced squad, with Danielle De Rossi and Andrea Pirlo likely to be key to the Azzurri’s possession-based play in midfield.

Italy will be participating in only their second Confederations Cup event, but the Azzurri’s experienced personnel could hold the key later in the tournament.

Uruguay’s hopes of World Cup qualification remain firmly in the balance after failing to win any of their last six games in the South American qualification group, so la Celeste may welcome the distraction of the Confederations Cup across the border.

Oscar Tabarez’s strike force of is one of the strongest in the competition, but it is Liverpool’s Luis Suarez who remains one of the best bets for the Golden Boot; with Uruguay coming up against both Tahiti and Nigeria in the group stages.

Seven of the Confederation Cup’s last 16 finalists have come from South America and la Celeste could spring a surprise in the ninth edition of the competition in Brazil.

Recommended Bets
Back Spain to win the Confederations Cup @2.62
Back Luis Suarez each-way (4 places) to be the top goalscorer @3.00