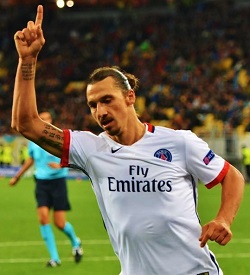 Published on May 4th, 2016 | by Sportingly Better Tipster

With talismanic striker Zlatan Ibrahimovic coming towards the end of his contract at PSG, Sportingly Better analyses the most likely destination of where the experienced striker will end up next.

Betting favourites Manchester United remain in pole position according to a number of bookmakers, with the player as short as 1.75 to now make the move to Old Trafford.

Manchester United’s attacking philosophy has been somewhat stagnated under Louis van Gaal’s rigid formation and tactics and the eventual move of Wayne Rooney deeper into midfield, coupled with Anthony Martial’s success on the left hand side, could see Ibrahimovic command the star status the player needs.

The switch to the Red Devils will largely depend on the managerial situation at the club, with Louis van Gaal entering the last year of his contract and the immediate availability of manager Jose Mourinho hanging over the current manager.

The Sweden international had originally said that it was “too late” to move to the Premier League, but more recently the striker has indicated there has been interest from a number of English sides.

The biggest obstacle for most clubs will be the contract and wage expectations of the outspoken 34-year old striker, with the forward likely to command a weekly wage in the region of £300,000 a week. Those demands will seemingly close the door on a lot of clubs, with somewhat more structured business models, which would count out the likes of West Ham, Tottenham and even Arsenal.

That leaves the likes of Manchester United and Chelsea as the only real contenders from the Premier League and despite the lucrative pull from the Chinese Super League, it is expected that Ibrahimovic would want to continue his immediate future in Europe, before calling to an end his career in the US with David Beckham’s MLS franchise a potential option in 2018.

Speaking of his striker PSG head coach Laurent Blanc said “concerning the future destination of Ibrahimovic, only Zlatan can answer” with Ibrahimovic himself declaring last month that he is unlikely to stay at the French champions, but there are claims that the player could still yet put pen to  paper and extend his stay with the capital side for another season.

Ibrahimovic’s is still believed to be in talks with his current club and the lure of probable further domestic silverware is believed to be a big plus for the French side, given the current predicaments of front runners Manchester United and Chelsea.

A one-year extension with PSG would seemingly close the door on any career move to the Premier League and given the uncertainty surrounding Manchester United’s managerial situation and potential Champions League involvement next year, back Ibrahimovic to commit to PSG for at least one more season at the Parc des Princes.

Recommended Football Tips
Back Ibrahimovic to sign for PSG before 3rd September @2.50