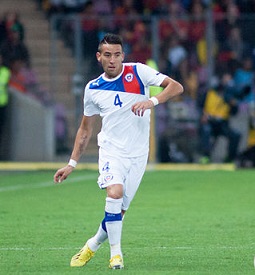 Chile will be looking to navigate their way through World Cup finalists Spain and the Netherlands in Group B, as the South American side open their campaign against Australia on Friday.

Jorge Sampaio’s side have been impressive from the back end of their World Cup qualifying campaign, whilst a string of high-energy displays have also caught admirers during the international breaks.

A three-man defensive line including Cardiff City midfielder Gary Medel may be unorthodox, but open and almost cavalier attacking football is likely to entice the neutral spectator.

Opponents Australia are the lowest ranked team in this year’s World Cup, but the Socceroos will be hopeful of pulling a few surprises, with Ange Postecoglou’s bold young approach.

Only Argentina scored more goals in Conmebol qualifying than Chile and Jorge Sampaio’s high-pressing, attack-minded side should catch the Socceroos on the hop.