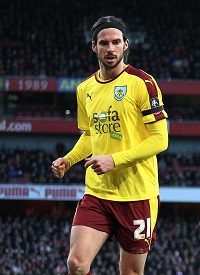 This week our free football tips come from this weekend’s games in the English Championship, as Sheffield Wednesday host Rotherham and Burnley take on Blackburn in the Lancashire derby.

Hosts Sheffield Wednesday may go into this game on the back of a four-game run without a victory, but the Owls do find themselves currently enjoying a 14 match unbeaten run at Hillsborough.

Coach Carlos Carvalhal has a fully fit squad for Saturday’s encounter against Rotherham, with only Fernando Forestieri out through suspension.

One of Dejphon Chansiri’s bigger acquisitions; Gary Hooper will have to be watched with the former Celtic and Norwich striker having scored or assisted in eight of his last six league games at Hillsborough.

Opponents Rotherham have lost seven of their last eight matches away in the Championship, with the Millers conceding at least twice in six of those defeats.

Backing Sheffield Wednesday to score two or more goals is worthy of consideration at odds of 1.90, despite Rotherham having conceded just four goals since Neil Warnock’s arrival, with betting tips on onlinewedden.com covering both teams to score tips at evens.

Sheffield Wednesday have won their last two meetings against Rotherham and the Owls should continue their fine run at Hillsborough this weekend.

League leaders Burnley will be looking to maintain their position at the top of the Championship, when Blackburn travel to Turf Moor in the Lancashire derby.

Historically this match has been low scoring with five of the last six meetings going under the 2.5 goals mark, but the need for all three points could see the hosts go on the front foot with Sam Vokes and Andre Gray likely to continue their partnership.

Burnley have won six of their last seven games at Turf Moor, conceding just once and the odds of a home win will attract plenty of interest in the outright betting markets.

Opponents Blackburn are likely to utilise their set plays against Sean Dyche’s men, with Rovers having scored more goals via set-pieces than any other side in the Championship this season.

Blackburn have scored at least once in each of their last 10 league trips to Turf Moor, but the form of the Clarets and Andre Gray should see Burnley creep over the line.