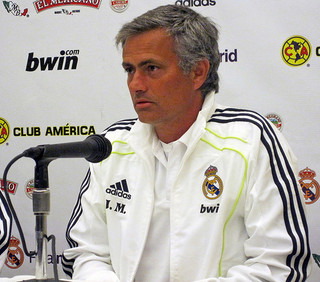 The knockout stages of the UEFA Champions League returned this week, but all eyes will be on the Santiago Bernabeu tonight where Real Madrid face Manchester United.

Manchester United have never won away at Real Madrid and the Premier League leaders have a daunting task ahead of them tonight at the Santiago Bernabeu.

Unlike their opponents, Sir Alex Ferguson’s side have all but wrapped up another domestic title after moving 12 points ahead of Manchester City in the Premier League, but Ferguson’s decision to field a strong side against Everton on Sunday jarred with Mourinho’s own decision to rest midfielders Xabi Alonso, Sami Khedira and Mesut Ozil.

The Red Devils have yet to be tested in the Champions League this season, but Real Madrid’s passage to the knockout stages included matches against the champions of England, Germany and the Netherlands.

The Old Trafford outfit are priced at 5.25 for the victory tonight and these betting odds may prove tempting to punters, given the form of Robin Van Persie and Wayne Rooney as well as Real Madrid’s own form this season.

With defeat likely however, an away goal may prove crucial for Manchester United and the club’s leading marksman Robin Van Persie appears to be the man most likely to get it, after scoring 11 goals in his last 14 appearances for the Premier League leaders.

Strike partner Wayne Rooney may be deployed much deeper to help get to grips with Xabi Alonso in midfield, but Michael Carrick and Tom Cleverley will need to retain the ball well to encourage spells where the pressure will be less intense for the English side.

Phil Jones has effectively contained Gareth Bale and Marouane Fellaini in recent weeks and the England international could be placed on the right side of the defensive midfield to keep a close eye on both Mesut Ozil and Cristiano Ronaldo.

Ecuador international Antonio Valencia’s defensive work-rate should see the winger renew his partnership with Rafael down the Manchester United right, whilst on the opposite flank Shinji Kagawa could be favoured for similar reasons over the fit again Ashley Young.

Hosts Real Madrid have not kept a clean sheet in the Champions League this season and the defensive frailties of Jose Mourinho’s side have been well documented.

Iker Casillas was dropped in favour of Antonio Adan earlier in the year, but Spain’s number one goalkeeper has since picked up an injury, so January signing Diego Lopez will continue to deputise.

Defender Pepe is once again match fit, so the impressive Raphael Varane (who Manchester United were close to signing in 2011) will have to make do with a place on the bench.

Cristiano Ronaldo comes up against his former club for the first time since moving to Real Madrid for £80 million four years ago and the Portugal international will be Manchester United’s main worry on Wednesday.

With attacking talisman on both sides, goals somewhat predictably seem likely. The last eight European Cup/Champions League matches between the two sides have produced 39 goals and all signs point to that record continuing tonight.