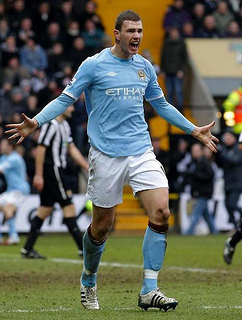 After slipping to a 3-1 defeat at the Amsterdam Arena on matchday three, English champions Manchester City must avoid a similar result or risk almost certain elimination from the UEFA Champions League. Elsewhere Real Madrid will be hoping to leapfrog Borussia Dortmund at the top of Group D, with the two sides meeting at the Bernabeu tonight.

Chelsea entertain leaders Shakhtar Donetsk in Group E, knowing a win could be crucial, with a trip to the Juventus Stadium next up for the Blues.

Elsewhere Manchester United and Barcelona continue to ease through their qualification groups, Malaga lead Group C after a 1-0 win over Italian giants AC Milan on matchday three, whilst Porto asserted their position at the top of Group A with a 3-2 victory at the Estadio do Drago.

Bayern Munich are tied for the lead on six points in Group F alongside Valencia and surprise package BATE Borisov, whilst Arsenal face a tough trip to Gelsenkirchen to face high-flying Schalke at the Veltins Arena.

French champions Montpellier face a daunting trip to the Karaiskakis Stadium in Greece, where Olympiakos will be hoping to make ground on Schalke and Arsenal in Group B.

Rene Girard’s side have won just three games in Ligue 1 this season and the loss of Oliver Giroud as the focal point in the MHSC team has clearly disrupted Girard’s style and plans in Le Championnat.

Montpellier sit bottom of Group B with just one point and La Paillade have conceded two goals in every game in the Champions League this season, including matchday three’s 2-1 defeat against Olympiakos at Stade de la Mosson.

Hosts Olympiakos are unbeaten in the Superleague with eight wins from nine games and the 22 goals that Leonardo Jardim’s side have scored is almost double that of second placed PAOK Salonika.

Algerian Rafik Djebbour has scored eight goals in six games for Erythrolefki, but it is Greek forward Konstantious Mitroglou that has grabbed the goals in Europe.

Greek champions Olympiakos are flying in the Superleague and the intimidation at the Karaiskakis Stadium should be too much for an out of sorts Montpellier side.

Manchester City’s hopes of Champions League progression suffered a blow on matchday three after The Citizens suffered a surprise 3-1 defeat at the Amsterdam Arena.

Whilst elimination from Europe could boost Manchester City’s domestic aspirations, failure to escape the group stages for a second year in a row will leave a lot of questions squarely at the feet of Roberto Mancini.

Mancini has called for “three big performances” in the Champions League, but injuries to Joleon Lescott, James Milner, Micah Richards, Maicon, David Silva and Jack Rodwell will not help matters.

Joe Hart’s form in Europe has been superb and the England international will need to task his back-line with keeping tabs on the lively Siem de Jong and Christian Eriksen for visitors Ajax.

Ajax’s form has stuttered in the league since their 1-0 victory over FC Twente five weeks ago and Frank de Boer’s side are without a win in four games in the Eredivisie.

Ajax showed their quality against The Citizens two weeks ago, but the need for Manchester City to record three points should be the telling factor at the Etihad Stadium tonight.