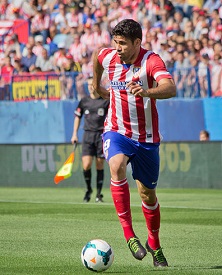 A 2-0 win from Chelsea at Stamford Bridge saw us return both of our betting tips in the Champions League quarter finals last time out, whilst a 3-1 victory for Bayern Munich helped land our bet on the Asian handicap.

Sportingly Better takes a look at the best UEFA Champions League predictions and free football betting tips for the semi-finals of the competition, as Chelsea take on Atletico Madrid at the Vicente Calderon Stadium.

Atletico Madrid will be looking to continue their hopes of a European and domestic double, with Premier League side Chelsea the visitors to the Vicente Calderon Stadium on Tuesday.

The hosts have been boosted by the fact that on-loan goalkeeper Thibaut Courtois is eligible to face his parent club Chelsea, news that will be welcome to Atleti coach Diego Simeone.

Atletico Madrid have won eight of their last 10 matches in the UEFA Champions League and the Spanish side will be hopeful of taking an advantage with them to west London in one weeks time.

Los Colchoneros were 4-1 victors in the UEFA Super Cup in 2012; the last time these two sides met with the Spanish side arguably a much stronger force than they were in their cup triumph.

Opponents Chelsea were shocked by relegation-threatened Sunderland on the weekend, so the arrival of the Champions League semi-finals this week offers the Blues arguably the best hope of silverware this season.

Star player Eden Hazard remains doubtful, whilst Branislav Ivanovic’s suspension will likely give Ashley Cole back his spot at left back with Cesar Azpilicueta coming across to a more familiar right back role.

January signings Mohamed Salah and Nemanja Matic are both unavailable after featuring earlier in the competition, but former Atleti striker Fernando Torres is expected to get the nod up front for Chelsea.

Spain’s meanest defence meets the Premier League’s tightest backline and although there will be plenty of impetus and desire from the home side, expect a game of few goals on Tuesday.