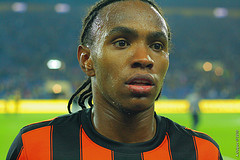 The Champions League returns to our screens tonight with Chelsea taking on Juventus in Turin.

Roberto Di Matteo will need to ensure the Blues avoid defeat at the Juventus Stadium to maintain their advantage over the Italian champions, with FC Nordsjaelland the visitors to Stamford Bridge in the final game of the group.

Manchester United eased through to the last 16 with four wins from four in Group H, so manager Sir Alex Ferguson has chosen to leave a number of first team players in England for the match against Galatasaray.

Barcelona will look to get back to winning ways after slipping to a surprise defeat against Celtic last time out, whilst Manchester City, AC Milan and Arsenal all still have work to do to have any hope of reaching the knockout rounds.

Victor Moses’ late winner at Stamford Bridge last time out, inflicted Shakhtar Donetsk’s first defeat in the Champions League, despite the Ukranian side outplaying the European champions for large periods of the game.

The Brazilian contingent of Willian, Alex Teixeira and Fernandinho have been impressive for the Hirnyky in Europe alongside Armenian midfielder Henrikh Mkhitaryan, with Shakhtar having hit the back of the net in every one of their games in Group E.

Shakhtar have also been impressive domestically and their 15 wins from 16 games has left Hirnyky a full 11 points clear of Dnipro in second place in the Ukranian Premier League.

FC Nordsjaelland’s hopes of Champions League progression are virtually over, but The Wild Tigers 1-1 draw against Juventus in their last game in Denmark at least pointed to a touch of resilience in Kasper Hjulmand’s side.

FCN have had an education in Europe this season and heavy defeats against Juventus and Chelsea have left The Wild Tigers with three defeats from four games and a total of 11 goals conceded.

A win in Matchday 5 is absolutely vital for Shakhtar Donetsk’s hopes of qualification this year and Mircea Lucescu’s fluid and free scoring side should comfortably secure all three points tonight.